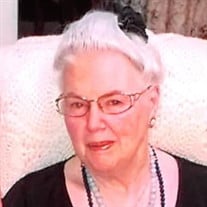 PELPHREY, Anna Marie, age 82, of Wilmington and formerly of Maineville, passed away Wednesday, July 7, 2021. Anna graduated from Harveysburg High School, class of ’56. She retired in the early ’90’s from Signature Flight Support, located at National Airport (Ronald Reagan Washington National Airport now) after more than 20 years of service. She was a dedicated and faithful member of the First Christian Church (Disciples of Christ) in Wilmington. Anna had a loving heart and maternal instinct towards her family. She loved to crochet in her free time, which she was very good at. While living in Washington D.C., she become an exceptional baker and decorator of cakes, with quite the collection of supplies to create them with. Of course, she was very fond of buying things on QVC and collecting dolls and bears. Her bear collection was extensive, basically consisting of Cherished Teddies to anything with a bear on it. She was known for her peanut butter soup and amaretto cake. Among many things, she will be remembered for how much she cherished her wedding anniversary, often reminding friends and family each year by telephone even after her husband died. Particularly noteworthy, she often discussed and reminisced about her 25th anniversary trip to Hawaii with Glen. She will also be remembered for how much she enjoyed talking to friends and family on the phone, with scheduled calling days and times with certain individuals. She was preceded in death by her husband, Glen, in 1989; her parents Herbert and Glenna Fairchild; brother and sister-in-law Lester and Pat Fairchild; brother-in-law Larry Titus; and nephew Kevin Lane. She is survived by two brothers Ronald (Barbara) Fairchild and Joe (Terry) Fairchild; three sisters Wanda (George) Cherryholmes, Rita Titus, and Sharon (Ron) Lane; four nieces Shara Stroschen, Glenda Cherryholmes, Ronda Reimer, and Amber Chapa; three nephews Brent Fairchild, Todd Fairchild, and Duane Titus; “stolen” grandson Brandon Fairchild; and several great nieces and nephews. Funeral services will be held 1 PM Tuesday, July 13 at the First Christian Church in Wilmington. Burial will be in Miami Valley Memory Gardens. The family will receive friends 11 AM - 1 PM Tuesday at the church. If desired, contributions may be made to the First Christian Church and/or Hospice of Cincinnati. Stubbs-Conner Funeral Home in Waynesville is serving the family. Condolences at www.stubbsconner.com.

The family of Anna Marie Pelphrey created this Life Tributes page to make it easy to share your memories.

PELPHREY, Anna Marie, age 82, of Wilmington and formerly of Maineville,...

Send flowers to the Pelphrey family.