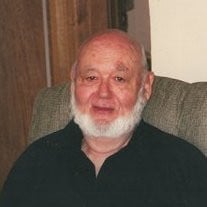 Baughn, Bernard E., age 94, of Centerville, Ohio, died at Miami Valley Hospital on July 11, 2013. Born October 23, 1918 in Detroit, Michigan, he was the son of the late Rev. J. Herman and Pearl Weimer Baughn. He was preceded in death by his wife, Opal Secoy Baughn; daughter, Karen Baughn Mathews; sisters Gretchen Baughn Turner, Romaine Baughn Wical; and grandson Nathan Paul Krummen. He is survived by daughter, Jill Baughn Buckner of Centerville, Ohio; sons, Dale Baughn and Kevin (Erinne) Baughn, of St. Helen, Michigan; grandchildren, Lisa Mathews Wagner, James Mathews, Alysia Buckner Krummen, Stephanie Buckner (Greg) Schilling, Zachary and William Berlin, eight great grandchildren and two great great grandsons. He was a graduate of Ohio Northern University. In 1981 he retired as Quality Manager of Nuclear Operations at Mound Laboratory, Miamisburg, Ohio after 34 years of service with the Monsanto Company. He served for 15 years as a lay-pastor in the United Methodist Church, the last 7 years as pastor of the Lytle United Methodist Church in Lytle, Ohio. He found great pleasure and satisfaction in the fishing cabins he built on Sturgeon Lake and Tamarack Lake in the bush country of northwestern Ontario, which he gladly shared with his family and many fishing friends for more than 50 years. Visitation with the family will be held from 11:00 am to 2:00 pm at the Stubbs-Conner Funeral Home in Waynesville, Ohio on Tuesday, July 16th. The Memorial Service conducted by the Rev. Shirley Cadle, will begin at 2:00 pm following the visitation. In lieu of flowers memorial gifts may be made to the Lytle United Methodist Church, 8464 Lytle Ferry Rd, Waynesville, Ohio. Condolences at www.stubbsconner.com. There is a destiny that makes us brothers None goes his way alone All that we send into the life of others Comes back again into our own

Baughn, Bernard E., age 94, of Centerville, Ohio, died at Miami Valley Hospital on July 11, 2013. Born October 23, 1918 in Detroit, Michigan, he was the son of the late Rev. J. Herman and Pearl Weimer Baughn. He was preceded in death by his... View Obituary & Service Information

The family of Bernard Elsworth Baughn created this Life Tributes page to make it easy to share your memories.

Send flowers to the Baughn family.