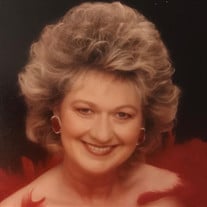 PHILLIPS, Bertha Sue, age 75, of Lebanon, passed away Sat., Jan. 4, 2020 at Hospice of Butler and Warren County. Born to Laura Peters (née Nunn) and Leonard Peters on June 25, 1944 in Waneta, Kentucky. She worked for over 30 years at Main Auto Parts/Carquest in Lebanon and Cincinnati. She later retired from the CVS in Lebanon. Bertha attended services at Dodds Pentecostal Church in Waynesville. When her children were younger they use to go camping quite often. She loved going to Gatlinburg, TN and looked forward to stopping by the Old Mill Restaurant and the Apple Barn. She was a collector of anything and everything; she liked NASCAR, Hot Wheels, Beanie Babies, and many more. Bertha loved to shop, especially if she could find a deal. She was a very caring and giving individual. If you liked a sweater she had on, she would just give it to you. Many times she would go out and purchase items to then donate. She was known for her habit of never being able to buy just one of anything. In her free time, she would visit people, check in on them, and loved to talk to them about what was going on and occasionally told them what for. She was definitely a feisty lady that few could keep up with, she was always on the go. When she walked in the room, she would light it up. She will also be remembered for being the favorite aunt. Her passion and her legacy was her grandchildren and great grandchildren. She was preceded in death by her son Jon David Phillips; her grandson Zachary Phillips; her parents; three brothers Sterling, Raleigh, and Ed Peters; and four sisters Jean Allikas, Nan Hammiel, Dora Cox and Sherry Ann Peters. She is survived by her devoted husband of 57 years, Dennis; three daughters Ramona (Don) Perkins of Middletown, Denise (Steve) Kirkland of Morrow, and Angela Johnsen of Lebanon; six grandchildren Keelye (Nick) Coffin of IL, Kristi (Aaron) Weber of Dayton, Adam (Megan) Hamilton of Troy, Morgan Sellers of Morrow, Faith Johnsen of Lebanon, and Tristen Johnsen of Lebanon; eight great grandchildren Emmalia Coffin, Myles Stork, Jackson Hamilton, Jase Coffin, Dakota Lawson, Justus Coffin, Corwin Weber, and Conor Weber; one brother Bill Peters; one sister Kate Mayberry; and two sisters-in-law Frances and Maxine Peters of Dayton. She also leaves behind several in-laws and many nieces and nephews. Funeral services will be held 1 PM Wed., Jan. 8 at Stubbs-Conner Funeral Home in Waynesville. Pastor Robert Hughes will be officiating. Burial will be in Miami Cemetery in Corwin. The family will receive friends 11 AM -1 PM Wed. at the funeral home. If desired, contributions may be made to Hospice of Butler and Warren County. Condolences at www.stubbsconner.com.

PHILLIPS, Bertha Sue, age 75, of Lebanon, passed away Sat., Jan. 4, 2020 at Hospice of Butler and Warren County. Born to Laura Peters (née Nunn) and Leonard Peters on June 25, 1944 in Waneta, Kentucky. She worked for over 30 years at Main... View Obituary & Service Information

The family of Bertha Sue Phillips created this Life Tributes page to make it easy to share your memories.

Send flowers to the Phillips family.