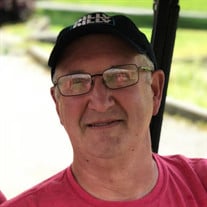 BRADLEY, Bo, age 67, of Waynesville, passed away Friday, November 29, 2019 at Hospice of Butler & Warren Counties. Bo was a 1971 graduate of Waynesville High School and was one of the early inductees into the Waynesville Athletic Hall of Fame. He was named in the Top 7 Players in Spartans history for Waynesville High School football, and played collegiately for Bowling Green State University and Georgetown College. During his younger days, Bo owned and operated a family farm for 18 years. More recently he focused his attention on B&B Carryout in Waynesville. B&B Carryout, while serving fuel, has become renowned for its small town charm and as a one-stop-shop for beer, bait and beloved food selections like biscuits and gravy and the famous “Big Bo” sandwich. The Dayton Daily News recently wrote an article about the way Bo operated B&B by describing it as “a home town feel with a side of sarcasm.” Bo loved the carryout; the atmosphere, cooking the food, the comradery of his customers and ensuring that everything was done correctly, especially maintaining the coolers. The success of B&B and the regular patronage of so many people were strictly because of the effort and enthusiasm that Bo gave to his business on a daily basis. Bo was a member of the Sons of the American Legion (Post 615) in Waynesville, the Waynesville Alumni Association, the Waynesville Chamber of Commerce, and he was awarded Waynesville Citizen of the Year in 2003. Over the years, he was active in numerous community fundraisers and events, including the Athletic Boosters, the Country Fair, the Halloween carnival and the Sauerkraut festival- all in Waynesville. Loyal, generous and sarcastic, Bo had a huge heart and was known to do anything for those around him. He was often the center of attention due to his quick wit and sense of humor. He hated stupid questions, yet loved to laugh. Possessions were inconsequential to him. He pushed himself in everything he did. He truly enjoyed riding his bike and his motorcycle. He was head-strong. He biked long distances and once rode from Waynesville to Denver, Colorado, mainly because someone told him he couldn’t do it. He rode his motorcycle all over the United States and Canada. On his first long distance ride, he rode to Fairbanks, Alaska. Locals told him that he was crazy for attempting to go any further on such a treacherous trail on his current motorcycle, so he turned back. He returned home, bought a better motorcycle, and did it all again, successfully reaching Prudhoe Bay on the subsequent attempt, dipping in his feet the Arctic Ocean. He also enjoyed reading, mushroom hunting, hiking the trails at Caesar Creek State Park, and watching old reruns of Law & Order. He was preceded in death by four grandchildren Liam, Heath, Amelia, and Baby Bradley; his parents Kenneth and Ruth Anna Bradley; and by Happy, an Australian Border Collie mix that meant the world to him. He is survived by his former wife of 45 years, Gail; four sons Jerrod (Margie) Bradley, Jason (Jennifer) Bradley, Randy (Blair) Robbins, and Joe (Jessica) Bradley; nine grandchildren Kirsten (Caleb) Bryant, Kara Bradley, Korryn Bradley, Kooper Bradley, Bella Bradley, Sandler Robbins, Arlington Robbins, Josslynn Bradley, and Jackson Bo Bradley; Great Granddaughter Aubree; two sisters Connie (Lonnie) Schear and Barb (Gus) Edwards; and numerous aunts, uncles, nieces, nephews, and cousins. The family will receive friends 3 - 8 PM Monday, December 2 at CrossView Christian Church in Waynesville. Funeral services will be held 1 PM Tuesday, December 3 at CrossView Christian Church. Stubbs-Conner Funeral Home in Waynesville is serving the family. If desired, contributions may be made in Bo’s memory to the Liam Nolen Bradley Memorial, NEC Research, Cincinnati Children’s Medical Center, 3333 Burnett Ave., MLC 9002, Cincinnati, OH 45229. Condolences at www.stubbsconner.com.

BRADLEY, Bo, age 67, of Waynesville, passed away Friday, November 29, 2019 at Hospice of Butler & Warren Counties. Bo was a 1971 graduate of Waynesville High School and was one of the early inductees into the Waynesville Athletic Hall of... View Obituary & Service Information

The family of Bo Bradley created this Life Tributes page to make it easy to share your memories.

Send flowers to the Bradley family.