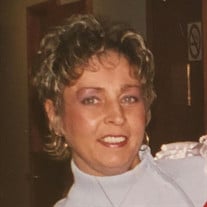 SEXTON, Bonnie L. (Morrison), age 61, of Miamisburg, passed away Friday, April 10, 2020 at Hospice of Dayton. Extremely outgoing, giving, and supportive, Bonnie was a strong lady who took satisfaction in helping and caring for others. She greatly enjoyed fishing, gardening, canning, and cooking. Her homemade vegetable soup and New Year’s cabbage rolls were her most savored items. She also loved shopping at thrift stores and sneaking off with her best friend, Phyllis, to the riverboat casinos to play the slot machines. Bonnie always made Christmas special for her daughter growing up. In addition to the gifts, it was tradition to make fudge, a cheeseball, cut summer sausage, and prepare a shrimp tray in the morning every year. The tradition ended up being passed down to the point her grandchildren has become accustomed to the tradition over the years. In fact, she adored her grandkids and made no excuse for spoiling them every chance she could. She will also be remembered for the love of her Shih Tzu dog, Chloe. She was preceded in death by her parents Wilson and Ann Morrison, and one brother Joe Morrison. She is survived by her significant other of 13 years, Gary Flannery; daughter Elisa Deters; two granddaughters Kennedy Deters and Abbey Morrison; step daughter Tiffany (Tad) Creamer; step grandchildren Bront’e Creamer and Bogart “Boggie” Creamer; three brothers David Morrison, James B. (Ella) Morrison, and John (Judy) Morrison; and one sister Kay Woods. Funeral services will be held 12 PM Friday, April 17 at Stubbs-Conner Funeral Home in Waynesville. Burial will be in Sugar Grove Cemetery, West Alexandria. Tom Clark will be officiating the services. The family will receive friends one hour prior to the service Friday at the funeral home. If desired, contributions may be made to Hospice of Dayton. Condolences at www.stubbsconner.com.

SEXTON, Bonnie L. (Morrison), age 61, of Miamisburg, passed away Friday, April 10, 2020 at Hospice of Dayton. Extremely outgoing, giving, and supportive, Bonnie was a strong lady who took satisfaction in helping and caring for others. She... View Obituary & Service Information

The family of Bonnie L. Sexton (Morrison) created this Life Tributes page to make it easy to share your memories.