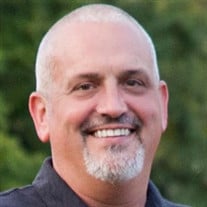 HAMILTON, Brian Michael, age 43, of Loveland and formerly of Chandler, Arizona, passed away Saturday, October 23, 2021. He was born September 18, 1978, to Gary Hamilton and Sherry Truitt in Dayton. Brian attended Centerville schools and moved on to the University of Cincinnati. He had been working at Carl’s Stereo Plus Pickups in Cincinnati. He was inquisitive, ingenuitive, and always working on something, especially if it was technical or anything related to computers or cars. He had an uncanny ability to convince others that he could do impossible feats and then somehow actually complete the challenge. He enjoyed watching football with his wife and friends, where he was always cheering on the Cleveland Browns and The Ohio State Buckeyes. He was dependable and loyal to everyone that crossed his path. His friends and family nicknamed him the “Silver Fox,” because he always swore he was 10 years older than he was due to his “platinum” hair. He was a people person and was a magnet for those around him. He had an infectious laugh and a smile that would light up the whole room. As the life of the party, he was known as a comedian and had an amazing ability to make sure everyone was happy and having a good time. He was always up for an adventure; a few memorable times include the times he went kayaking and the numerous times he would break out his dance moves at the most random moments. One of his biggest joys was getting others to laugh and helping others. He was extremely creative and could create masterpieces with his hands. He enjoyed wood working and created bedframes, tables, and numerous other items of furniture for his family and friends. In addition, he would work with his son on logo sets, dirt bikes, and four-wheelers. He loved neighborhood “scootie rides” and bonfires, and playing euchre with friends and family. He enjoyed being the score keeper during his son’s baseball games and loved watching his son play. When he was able to attend, he loved watching his daughter cheer at her school’s football games. He absolutely adored his wife and loved to snuggle with her on the couch and watch movies, go out to dinner, and go on random adventures. Any time that he was able to spend quality time with his family, he soaked it up, whether it was when they traveled to Gatlinburg or to the beach in Florida. The most important thing in his life and his biggest accomplishment was his wife and his two children. He was so very proud of them and loved them more than anything. He is survived by his wife of 12 years, Jessica; one daughter Zoey; one son Brody; parents Gary (Donna) Hamilton and Sherry (Lyn) Truitt; two sisters Sara (Randy) Fite and Amy (Thomas) Hertter; two brothers Joey (Mallery St. John) Hamilton and Zachary Scott; one step brother Derek (Deanette) Yarger; four nieces and nephews Colton Fite, Carter and Carly Hertter, and Elyse Hamilton; and close friends Daniel “Gay Dan”, Weston, Buddy, Ryan, Ludi, and numerous others. A funeral service will be held 3 PM Thursday, October 28 at Stubbs-Conner Funeral Home in Waynesville. Sie Brock will be officiating. The family will receive friends from 1 PM -3 PM on Thursday at the funeral home. If desired, contributions may be made in memory of Brian Hamilton to any Fifth Third Bank branch. Please mention his name when making your contribution. Condolences at www.stubbsconner.com.

The family of Brian Michael Hamilton created this Life Tributes page to make it easy to share your memories.

HAMILTON, Brian Michael, age 43, of Loveland and formerly of...

Send flowers to the Hamilton family.