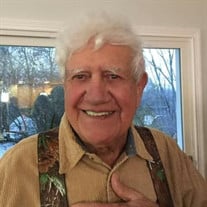 SHEARER, Carl D., age 92, of Franklin, passed away at his residence on Sunday, December 12, 2021. Carl honorably served in the Army during the Korean Conflict. He served his country by working as a cook and with a group that focused on anti-aircraft specialties. In addition, he was chosen to be a part of a group of special, highly classified soldiers to witness and be involved with the first atomic bomb cannon gun, which was tested near Las Vegas. Carl retired from AK Steel in 1990 after 42 years of service. He was a faithful member of the Dixie Highway Christian Church in Middletown. Soft-spoken, kind, loving, sweet, humble, honest, and family-oriented, Carl was always faithful to God, his church, his wife, and his family. He was the strong yet silent type who was always willing to help others. Carl greatly enjoyed mowing his grass, reading the Bible and newspaper, and traveling. Over the years, he traveled to nearly all of the 50 states, Mexico, and Canada. Niagara Falls and Gatlinburg were some of his favorite travel destinations. In fact, the many trips to Gatlinburg with family became a bit of a tradition. He always enjoyed showing his family new destinations, which will always be remembered fondly by grandkids for taking them to such places as Virginia Beach and one harrowing trip through the streets of New York City in his car. He will also be remembered for how much he loved babies and children and for all the years he and his wife hosted Christmas in their home. He was preceded in death by his loving wife, Juanita, in 2008; his parents Lucian and Delilah Shearer; six brothers Charlie, Rodney, Willis, Montford, Orville, and Cecil Shearer; four sisters Lillie Johnson, Dorothy Snowden, Thelma Francis, and Dopsy Kelley; and sons-in-law Timothy Winchek and John Furnas. He is survived by his two daughters Connie Winchek (Tom McKay) and Polly (Clifford) Sullivan; seven grandchildren Danaye (Ja) Franek, Erin (Phillip) McDowell, Lindsey (Dereck) Norvell, Jerica Furnas-Edwards; John Carl (Holly) Furnas, Sheila Watts, Desiree Sullivan, and Matthew (Tiffani) Sullivan; and 17 great-grandchildren. The family will receive friends 11 AM - 12 PM Thursday, December 16 at Dixie Highway Christian Center in Franklin. The funeral service will be held at noon Thursday at the church, with Dave Bowling officiating the service. Burial will be in Miami Cemetery, Corwin. Stubbs-Conner Funeral Home in Waynesville is serving the family. Condolences at www.stubbsconner.com.

SHEARER, Carl D., age 92, of Franklin, passed away at his residence on Sunday, December 12, 2021. Carl honorably served in the Army during the Korean Conflict. He served his country by working as a cook and with a group that focused on anti-aircraft... View Obituary & Service Information

The family of Carl D. Shearer created this Life Tributes page to make it easy to share your memories.

SHEARER, Carl D., age 92, of Franklin, passed away at his residence...

Send flowers to the Shearer family.