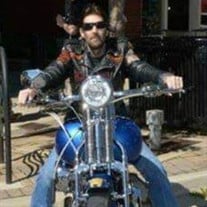 STIVER, Carl E. Jr., age 55, of Waynesville, OH, passed away, surrounded by his family, on Friday, September 17, 2021, after battling a cancerous brain tumor. He was born June 23, 1966, in Dayton, OH, to the late Joanne Irene and Carl Eugene Stiver, Sr. Carl graduated from Warren County Career Center and Waynesville High School, class of ’85. For 20 years, he worked as a heavy equipment operator helping his brother-in-law and best friend, Tom Walters. He was a member of the Waynesville United Methodist Church and recently had been attending Dryden Road Pentecostal Church in Moraine. Strong-willed, courageous and quite the daredevil, Carl lived life to its fullest, loved the rush of extreme activities, and sought out adventurous pursuits whenever he could. His hobbies included riding as fast as he could on his Harley; and watching drag racing, NHRA, and NASCAR. During the course of his life, riding his motorcycle, a Harley Springer Softail, gave him some of his greatest joy. Of course, being a Papaw ultimately gave him the greatest joy in his latter years. He was known for his burnouts and was referred to as “God of Thunder” in a featured article called Thunder Road in Ohio, in the Ohio Motorcycle Magazine. Among many things, he will be remembered for how much he loved riding his Harley in Sturgis, SD, whereby he savored the fresh air and natural beauty of the mountains and open road. In addition, he will be remembered for participating in charity events, specifically poker runs and Toys for Tots. He was preceded in death by his parents and two brothers-in-law Tom Walters and Marvin Ross. He is survived by his daughter Tess Stiver (Robby Sharrett); two granddaughters Ashlynn Sharrett and one on the way; one brother Chuck (Geri) Stiver of Waynesville, OH; three sisters Judy Ross of Spring Valley, OH, Karen McIntosh of Franklin, OH, and Linda Walters of Waynesville, OH; many nieces, nephews, and numerous friends. A celebration of life will be 2 PM Friday, September 24 at Stubbs-Conner Funeral Home in Waynesville. Rev. Benny Sutherland will be officiating. Burial will be at Miami Cemetery in Corwin. The family will receive friends 5 PM – 8 PM Thursday, September 23 at the funeral home. The family invites all who are interested to view the service live on the Websteam at www.stubbsconner.com, accessible by clicking the link below Carl’s obituary on your mobile device or by accessing it from tribute wall tab of Carl’s page via computer or tablet. If desired, contributions may be made to Hospice of Dayton and/or Brain Cancer Research. Condolences at www.stubbsconner.com.

STIVER, Carl E. Jr., age 55, of Waynesville, OH, passed away, surrounded by his family, on Friday, September 17, 2021, after battling a cancerous brain tumor. He was born June 23, 1966, in Dayton, OH, to the late Joanne Irene and Carl Eugene... View Obituary & Service Information

The family of Carl E. Stiver Jr. created this Life Tributes page to make it easy to share your memories.

Send flowers to the Stiver family.