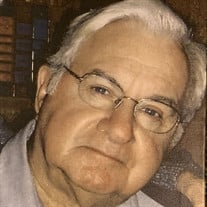 MORGAN, Charles “Charlie” H., Jr., age 86, of Waynesville passed away Sat. Feb. 16, 2019 at Ohio Living Quaker Heights, in Waynesville. Charlie was a veteran in the US Army and served during the Korean Conflict. In his younger years, he greatly enjoyed camping and boating. He was on the Waynesville Chamber of Commerce board and served on the committee that founded the Sauerkraut Festival. As a caring and selfless individual, his strong beliefs and faith helped him when he worked for Warren County Courts as a probation officer. He worked multiple jobs over the years; some of them including: owning a car lot, driving an over-the-road tractor trailor, working at NCR, owning two gas stations, owning his own water business as well as two water trucks, owning dump trucks and helping with the construction on State Route 42, and helping build the retaining wall by Subway in Waynesville. Over the years, he helped several individuals build multiple businesses in the Waynesville community. Throughout his life however, he took the most pride in his work at Miami Cemetery in Corwin. He served as superintendent for the cemetery for 12.5 years, ultimately assisting his grandson when he took over, who runs the cemetery to this day. Charlie loved to work and help others and actually found it fun. When he wasn’t working at the cemetery, he could be found at the tractor barn with a group of guys shooting the breeze or assisting in some work. Compassionate and passionate, he always wanted everyone to feel loved and in all aspects of his life. Sometimes these traits became a fault of his own due to wanting to see things through. When Der Dutchman, McDonald’s, and Subway opened he made sure they had a packed house and would turn the event into a benefit drive for the local firehouse or school. He could always raise money for a cause and seemed to do it with ease, with donations coming in from across the United States. His boisterous personality is something his family and friends will deeply miss. He always made sure his kids, grandkids, and even strangers had fun, because he was never able to when he was growing up. He always made sure there were toys, and especially bicycles, for anyone that needed them. There was a soft spot in his heart for his friends that were in wheelchairs. He would find a way to get them all on the bike trail so they could cruise around together, or the many times he had countless dinners with all of them. He would help anyone, but especially anyone that was less fortunate than him, often taking them to lunch. In one notable case, he built a special cart for a child to get around in. Without even realizing it, the family believes he helped at least one person a day. He kept his strong faith, belief in prayers, and his determination to keep fighting to get better until the very end. He was preceded in death by one granddaughter Teka Green; his parents Charles H. and China M. Morgan; three brothers Dennis, Glendon, and Bill; and one sister Emma Jean McClure. He is survived by his wife of 64 years, Alberta; one son Brent Morgan; two daughters Sandy (Walt) Bryant and Darla (Ron) Bolling; seven grandchildren Mandy (Phil) Steinway, Adam Howard, Eric (Jenny) Howard, Dustin Howard, Josh (Hannah) Bolling, and Morgan (Mark) Stine; 18 great grandchildren with an additional one on the way; one brother Raymond (Juanita) Morgan; one sister Junie Alexander; and all the people at the tractor barn. Funeral service will be held 11 AM Fri. Feb. 22 at the Waynesville First Baptist Church. Dennis Bunnell will be officiating. Burial will be at Miami Cemetery, Corwin. The family will receive friends from 4:00 PM - 8:00 PM Thurs. Feb. 21 at church. Stubbs-Conner Funeral Home is serving the family. The family would like everyone to write down some memories in a memory album at the visitation and funeral. If desired, contributions may be made to the Charlie Morgan Chapel at Miami Cemetery. In Charlie’s words, to make a long story short, “Praise the Lord, full speed ahead.” Condolences at www.stubbsconner.com.

MORGAN, Charles &#8220;Charlie&#8221; H., Jr., age 86, of Waynesville passed away Sat. Feb. 16, 2019 at Ohio Living Quaker Heights, in Waynesville. Charlie was a veteran in the US Army and served during the Korean Conflict. In his younger... View Obituary & Service Information

The family of Charles "Charlie" H. Morgan Jr. created this Life Tributes page to make it easy to share your memories.

Send flowers to the Morgan family.