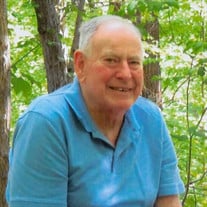 FRYE, Charles “Charlie” W., age 82, of Waynesville and formerly of Dayton, passed away Sunday, March 22, 2020 at Hospice of Butler & Warren Counties. Charlie graduated from Patterson Co-Op, class of ’56. He was a U.S. Army veteran, where he received the sharpshooter award while serving. In addition, he was a member of the Grace Brethren Church of Columbus. Gentle, generous, loving, caring, friendly, outgoing, and family oriented, Charlie was always willing to give a lending hand to family, friends, neighbors, and those in need. Charlie was the type of guy who was always doing something. He was mechanically inclined and loved building, fixing, or restoring things. In addition to several home additions and projects, he restored a jet boat-starting with the engine. He also restored a ’46 CJ2A Willys Jeep from the frame up, that he and his wife continued to drive around for fun. During his younger days, he enjoyed drag racing at Kil-Kare Speedway and was inducted into their hall-of-fame the first year they started it. They nicknamed him “The Wrench” for his knowledge and ability to fix automotive engines. Charlie’s hobbies over the years included gardening, fishing, boating on Lake Cumberland, genealogy, historical research, and trains. He especially enjoyed steam locomotives. He kept model trains of his favorites in his home, and would often take trips with his wife to visit and ride some of the more impressive historical steam trains of the past two centuries. As an excellent marksman, Charlie’s other favorite hobby was shooting. He took great pride in hitting his mark with great accuracy. He also enjoyed teaching his son and grandkids how to shoot. Other than his love of trains and shooting, Charlie will be remembered by his family for the annual trips to Florida during Christmas to be with his parents. The annual trips always involved packing the car completely full to the point that seating became secondary to all the items necessary for his parents’ winter stay. The special trips he took the family on out west to Arizona and Utah will always be remembered fondly as well. He was preceded in death by his parents Glenn and Margaret Frye, and one brother Fred Frye. He is survived by his wife of 54 years, Dorothy; son Gerald (Rachael) Frye); daughter Cheryl (Tom) Lynch; nine grandchildren Madison, Hannah, Jonathan, and Benjamin Frye, and Brian (Leah), Kevin, Stephen (Valerie), David, and Katianne Lynch; and two great grandchildren Adalynn and Remington. Funeral services will be held 2 PM Thursday, March 26 at Stubbs-Conner Funeral Home in Waynesville. Burial will be in Miami Cemetery, Corwin. The family will receive friends 12:30 PM - 2 PM Thursday at the funeral home. Tad Hobert will be officiating the services. If desired, contributions may be made to the Kettering Cancer Center or Hospice of Dayton. Condolences at www.stubbsconner.com.

The family of Charles "Charlie" W. Frye created this Life Tributes page to make it easy to share your memories.

Send flowers to the Frye family.