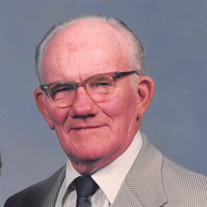 KRUER, Charles “Chick” W., age 97, of Spring Valley, passed away Tuesday, February 11, 2020 at Ohio’s Hospice of Dayton. Chick graduated from Springboro High School in 1941, having enjoyed his school days playing for the basketball team. He served in the U.S. Army during WWII, as forward observation with the 697th Field Artillery, attached to the 101st Airborne, and was wounded and received the Purple Heart in the Battle of Monte Cassino in Italy. He was a member of the Waynesville United Methodist Church, the Eastern Star Masonic Lodge #55 in Franklin, the Scottish Rite Valley of Dayton, and the Greene County Farm Bureau. While Chick retired from NCR in 1977 after 36 years of service, he was actually a lifelong farmer and continued to farm until the age of 94. Farming was his passion, his hobby, and his happy place. He focused mainly on crops and cattle over the years. He meticulously kept his land maintained, often trimming the ditch lines from weeds and brush well into his 90’s. Family oriented, strong-willed, independent, determined, extremely hardworking, tough, and budget-minded, Chick also had a great sense of humor and could be ornery in a fun way. Among many things, he will be remembered for his beautiful farms; how much he valued a quality education for his kids and grandkids; and how competitive he was when he played checkers and ping pong. He was preceded in death by his parents Walter and Grace Kruer; four brothers Al, Clifford, Ed, and Harry Kruer; and sister Helen Wolfe. He is survived by his wife of 64 years, Mary; two daughters Charlotte (Bryan) Austin and Rose Mary (Tom) Regan; four grandchildren Michael, Max, Dillon, and Caitlin; special niece Amy Kruer; special friend Mary Worthington; and many nieces and nephews. Funeral services 11 AM Monday, February 17 at the Waynesville United Methodist Church. Rev. Jason Sharp will be officiating. Burial will be in Miami Valley Memory Gardens. The family will receive friends 6 - 8 PM Sunday at Stubbs-Conner Funeral Home in Waynesville. If desired, contributions may be made to Ohio’s Hospice of Dayton. Condolences at www.stubbsconner.com.

The family of Charles "Chick" W. Kruer created this Life Tributes page to make it easy to share your memories.

Send flowers to the Kruer family.