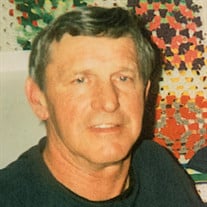 STOVALL, Charles D. “Doug”, age 81, of Lebanon passed away Sun. Feb. 10, 2019 at Ohio Living Quaker Heights, Waynesville, after an extended illness. Doug was born Dec. 27, 1937 in Muhlenberg County, KY and later moved to Dayton. He was a graduate from Wilbur Wright High School in 1956. He was a high school football player, later playing semi-pro for Dayton Triangles. After being in business with his father as a ceramic tile craftsman, he pursued his horse racing career in the mid 1970’s. He was an owner, trainer, and driver until his health prevented him from being active. As owner and breeder of Firethorn Shirley, he was proud that all her offspring took a mark of 1:55 or better. Other notable horses he owned or trained were Flea Market, Sister Sunray, Stoman, Marley, and Swango. The highlight of his racing career was a horse called “You Look Hot” who was named 2017 Aged Pacer of the Year by Ohio Harness Horseman Association. Joseph Essig has taken over the training in Doug's absence. He loved watching the races and all sports, playing cards, and took pride in mowing the paddocks and yard. He was a member of the Ohio Harness Horseman Association, US Trotting Association, and the Lebanon Eagles. He was preceded in death by one son Doug Stovall; one daughter Debi Farquhar; his parents James Brooks and Nancy Irene Stovall; and one sister Bettie Carole George. He is survived by his wife of 29 years, Lois; four children Kelley (Chris) Brown; Angi Stovall, Chris (Lisa) Stovall, and Mark Stovall; two step children William (Marianne) Freeze and Barry (Ethel) Freeze; ten grandchildren Jessica Fitzgerald, Kara Berger, Kristin Farquhar, Cody Stovall, Brittany Eades, Austin Duncan, Barry Langley, Jeremy Langley, Dylan Pittman, and Justin Sutherland; several great grandchildren; one brother James Stoval; one sister Carolyn Young; many nieces and nephews; and a host of friends including Larry Landon, Al Van Schaik, Mel Standley, and Mary Lou Stovall. The family will receive friends from 12:00 PM - 2:00 PM Sat. Feb. 23, 2019 at Stubbs-Conner Funeral Home in Waynesville. A memorial service will immediately follow at 2:00 PM. The family would like to thank the nurses and aides at Quaker Heights for the incredible and loving care of Doug, especially during his final days. Condolences at www.stubbsconner.com.

The family of Charles D. “Doug” Stovall created this Life Tributes page to make it easy to share your memories.

Send flowers to the Stovall family.