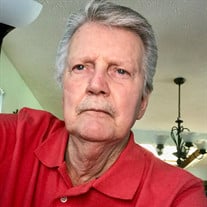 BATY, Daniel R., age 74, of Lebanon, passed away Friday, February 21, 2020 at the Atrium Medical Center in Middletown. Dan was a Vietnam Army combat veteran. He owned and operated Baty & Son Roofing & Siding for nearly 30 years. He worked 15 more years for Putnam Productions in Adams County. He was a member of New Freedom Church in Lebanon. He was also a member of Alpha Masonic Lodge #729 in Kettering. Quick-witted, funny, kind, loving, and loyal, Dan was also family oriented and protective of his family. He had a hardworking mentally, a trait demonstrated when he built his own house back in his younger days. He greatly enjoyed hunting, being outdoors, NASCAR, rooting on the Reds and Bengals, gardening, and woodworking. He used his woodworking skills to make cornhole boards to give away or sell. Dan also loved to fish, even making his own lures. His favorite fishing locations included Reelfoot Lake in Tennessee, Brookville Lake in Indiana, and his backyard pond. With all of the activities that Dan enjoyed doing that involved being outside, he also had an artistic side that showed how well rounded he was by his enjoyment of painting on canvas. There was great creativity in his art and it was something he did on his own that made him happy. Among many things, he will be remembered for being very patriotic, a proud American, and the love he always had for his country. He was preceded in death by his parents Otis and Dorothy Baty and one brother Donnie Baty. He is survived by his wife of 52 years, Karen; one son Daniel (Delores) Baty Jr.; five daughters Angie (Evan) DeShong, Danise Ness, Sheila Walker (Bob Carter), Shelley Shade, and Sheri (Travis) Kimberlin; 11 grandchildren Jacob Shade, Dayna Walker, Jared Shade, Sara Walker, Emilee Walker, Kadence Kimberlin, Kennedi Kimberlin, Jessica Ness, Kyle Ness, Ashley (Ben) Higgins, and Dillon DeShong; four great grandchildren Landen, Elijiah, Oliver, and Camden; and one brother Robert (Sandy) Baty. Funeral services will be held 11 AM Saturday, February 29 at New Freedom Church in Lebanon. Burial will be in Miami Cemetery, Corwin. Pastor Joe Shutts will be officiating the services. The family will receive friends 5 - 8 PM Friday at New Freedom Church. Stubbs-Conner Funeral Home in Waynesville is serving the family. If desired, contributions may be made to Hospice of Dayton. Condolences at www.stubbsconner.com.

The family of Daniel R. Baty created this Life Tributes page to make it easy to share your memories.

Send flowers to the Baty family.