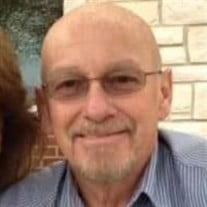 HYMER, Danny R., age 71, of Wilmington, passed away Wednesday, December 22, 2021, at UK Hospital in Lexington. Danny was born November 25, 1950, to Opal and Wilburne Hymer in Waynesville. He grew up in Waynesville and attended Waynesville High School. He was drafted into the U.S. Army in November of 1969 and later served as a U.S. Marine. Danny worked 15 years at McCauley Aircraft in Dayton and 25 years at Siemens in Norwood as a machinist and supervisor. He met his wife, Karen Vance, in 2005 and they united in holy matrimony on March 1, 2006. In his later years, he became pastor of Lighthouse Harbor Church in Lebanon and dedicated his life to God, the church, and the congregation. He truly cared for the people of the church and he will be greatly missed by those he served. Quick-witted, loving, caring, tender-hearted, and always willing to help others, Danny had a very recognizable and notable deep voice and was a special papaw. He had a personality that made him loved by all kids. During his younger days, he enjoyed playing basketball and softball. A proud member of the NRA, and a member of the Clinton County Sportsman’s Club, he greatly enjoyed hunting and eating deer, rabbit, and other wild game. His other hobbies included fishing with his brother, riding his motorcycle, taking ATV trips to Kentucky, and rooting for his beloved OSU Buckeyes. He especially enjoyed riding his motorcycle with his wife traveling with him. One meandering trip out west will always be remembered fondly as one of Danny’s most enjoyed bike trips. Among many things, he will be remembered for how much he loved his dog, Jake, and for how immaculate he kept his yard. The way he loved the holidays, especially how much he enjoyed playing games, the food and sweets that were prepared, and how he always assisted his wife with the food preparations, became one of Danny’s traditions. In addition, the many trips he took with Karen and his family to Gatlinburg and Amish Country also became incredible memories that he cherished. He was preceded in death by his parents, Wilburne and Opal Hymer; one sister, Joyce Ann Hymer; one brother, Gary Hymer; one son, Jason Hymer; and one daughter, Melissa Hymer. He is survived by his wife of 15 years, Karen; daughter, Shana (David) Murphy; two step-sons, Jason VanHoose (Verona Rouch) and Matt (Charlotte) VanHoose; step-daughter Amy VanHoose-Nemeth (John Wehrle); 13 grandchildren; 6 great-grandchildren; one sister Sue (Herb) Hammiel; and many nieces, nephews, and many other extended family members and friends. The family will receive friends 5 - 7 PM Monday, December 27 at Lighthouse Harbor Church in Lebanon, followed immediately by the funeral at 7 PM. If you would like to view the funeral service remotely, the funeral will be streamed live starting at 7 PM Monday via Facebook Live on the Facebook page of Stubbs-Conner Funeral Home. The graveside committal service will be held 10 AM Tuesday, December 28 at Miami Cemetery in Corwin. Larry Isaacs will be officiating the services. Stubbs-Conner Funeral Home in Waynesville is serving the family. If desired, contributions may be made to Lighthouse Harbor church in Danny’s memory. Condolences at www.stubbsconner.com.

HYMER, Danny R., age 71, of Wilmington, passed away Wednesday, December 22, 2021, at UK Hospital in Lexington. Danny was born November 25, 1950, to Opal and Wilburne Hymer in Waynesville. He grew up in Waynesville and attended Waynesville... View Obituary & Service Information

The family of Danny R. Hymer created this Life Tributes page to make it easy to share your memories.

Send flowers to the Hymer family.