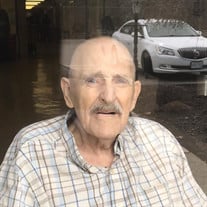 HAYNES, David R., age 86, of Blanchester and formerly of Waynesville, passed away Sunday, March 29, 2020 at The Laurels of Milford. He was born January 7, 1934 to Joe and Pearl Haynes in Lee County, Virginia. David worked more than 30 years at Tate Manufacturing Company in Dayton and officially retired after working 10 more years for Ralph Stolle in his research labs. He was raised in the Church of God faith and maintained a faith in God his entire life. A simple man with a big heart, David was a good, giving, and helpful man. He was very outgoing and greatly enjoyed joking around with others. He greatly enjoyed hunting, fishing, camping, and the great outdoors. Every year during the first week of hunting season, David would meet 25-30 friends and family to hunt in Athens County. He taught his sons to hunt and fish, thereby creating a lifelong bond and appreciation of the simple life. His upbringing was difficult, being a child of 17 siblings when counting step siblings. He learned to be self sufficient and appreciate the simple things in life. Canning vegetables with his wife became a yearly tradition for them over the years. He enjoyed cooking, but preferred the old fashioned foods like fried foods, beans, and corn bread, but not the sweet corn bread. The holidays were also important to David and his wife, and they always made sure that there was plenty of food prepared for the family dinners. Among many things, he will be remembered for his love of animals, especially his dogs. He was preceded in death by his wife Helen in 2012; one son Terry Weng; granddaughter Tammy Achterman; his parents; and two sisters Emory and Pauline. He is survived by three sons Robert (Alice) Weng, Barry (Joy) Weng, and Gary Weng; daughter Diana Murphy; four grandchildren Doug (Jennifer) Miller, Chrystal (Brian) Dean, Martinas (Chris) Smith, and Wendi (Andy) Taylor; eight great grandchildren Rylan, Tyler, Austin, Jackson, William, Courtney, Guslee, and Andy; two brothers Jr. (Kay) Haynes and Bob Haynes; and one sister Nettie Laughlin. Funeral services will be held 10:30 AM Saturday, April 4 at Stubbs-Conner Funeral Home in Waynesville. Burial will be in Miami Cemetery, Corwin. The family will receive friends 6-8 PM Friday at the funeral home. If desired, contributions may be made to Heartland Hospice. Condolences at www.stubbsconner.com.

HAYNES, David R., age 86, of Blanchester and formerly of Waynesville, passed away Sunday, March 29, 2020 at The Laurels of Milford. He was born January 7, 1934 to Joe and Pearl Haynes in Lee County, Virginia. David worked more than 30 years... View Obituary & Service Information

The family of David R. Haynes created this Life Tributes page to make it easy to share your memories.

HAYNES, David R., age 86, of Blanchester and formerly of Waynesville,...

Send flowers to the Haynes family.