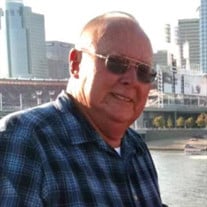 SCHRYVER, David M., age 80, of Waynesville, passed away Monday, March 22, 2021 at Miami Valley Hospital. He was born 30 August, 1940 in Dayton, but was raised in Marietta. He grew up on Warren Street in Marietta and moved to Dayton in 1955. David honorably served in the United States Army between 1964 - 1966. He retired from General Motors in the late ’90’s after 30 years of service. After his retirement from GM, he went on to work another 20+ years for Voss Chevrolet. He greatly enjoyed working and getting out and about, and especially made many friends and enjoyed his social network during his time at Voss. He was an active member of Bethany Baptist Church in Clarksville over the years. Friendly, helpful, and thoughtful, David could make friends easily and greatly enjoyed spending time with his family. He also enjoyed working being outdoors, especially working in his yard, and reading. His favorite reading material were western novels, particularly those written by Louis L’Amour. During his younger days, he enjoyed boating and camping. Some of his favorite times were taking his kids out on the boat at Caesar Creek Lake. Among many things, he will be remembered for how much he enjoyed traveling, especially the many trips to Orlando in Florida and the big city sights in New York City. He was preceded in death by his daughter Melissa Schryver; his parents Martin and Lucille Schryver; and his sister Barbara Jean Green. He is survived by his wife of nearly 50 years, Genevieve “Jenny”; daughter Melinda “Mindy” Schryver (Chris Miranda); grandson, who he raised, Deric Schryver; several other grandchildren; special niece and nephew who assisted him with care, Cindy and George Mallard; and family friends who also assisted with care, Clifton and Janna Lamb; and several nieces and nephews. A public graveside service and military honors will be held 11:30 AM, Saturday, March 27 at Miami Cemetery in Corwin. Pastor Tom Chattin will be leading the service. The family will receive friends prior to the graveside service from 11:00 - 11:30 AM Saturday at Miami Cemetery. You are invited to bring a chair to sit in comfort during the graveside service. Stubbs-Conner Funeral Home in Waynesville is serving the family. In lieu of flowers, contributions may be made to the charity of your choice in David’s memory. During this difficult time, if you are feeling ill or unhealthy in any way, you are encouraged to pay your respects in alternative methods, such as sending a sympathy card or sharing a memory though our online tribute wall. In addition, the services will be recorded for playback in the days following the service. The web stream will be available by clicking the link below David’s obituary on your mobile device at www.stubbsconner.com or by accessing it from tribute wall tab of David’s page via computer or tablet. Condolences at www.stubbsconner.com.

SCHRYVER, David M., age 80, of Waynesville, passed away Monday, March 22, 2021 at Miami Valley Hospital. He was born 30 August, 1940 in Dayton, but was raised in Marietta. He grew up on Warren Street in Marietta and moved to Dayton in 1955.... View Obituary & Service Information

The family of David M. Schryver created this Life Tributes page to make it easy to share your memories.

Send flowers to the Schryver family.