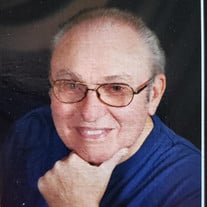 SHERWOOD, David L., a joyful and upbeat gentleman who loved to share the stories of his life, age 83, of Lebanon and formerly of Bel Air, Maryland, passed away Friday, July 24, 2020 at his home in the Otterbein Senior Life Community. David graduated from Cardington High School in Ohio. In 1957, he enlisted in the U.S. Air Force where his duties included flying target drones and his leisure time was spent playing trumpet in several combo bands while stationed at Schilling Air Force Base. After four years of active duty, Dave joined the National Guard and embarked on a 25+ year career with the Federal Aviation Administration – managing component procurement and quality control. During his tenure with the FAA, Dave earned a Bachelor’s Degree in business from Upper Iowa State University. Outgoing, talkative, and always positive, David greatly enjoyed playing tennis, riding his bike on the bike trail, gardening, woodworking, playing the trumpet, and spending time with his grandchildren. While he lived in Maryland, he played in the bell choir at his church. He had a volunteering spirit, and through the years he used his skills as a woodworker to do mission work on a Native American Indian Reservation in South Dakota and in Russia remodeling an orphanage. He had great interest in Native American Indians, often studying folklore and collecting artifacts related to their heritage. As a well-rounded man, he found enjoyment as a silversmith making jewelry, and also plied his talents doing ceramics and stain glass art. Over the years, he took pride in staying in touch with his high school classmates, usually in the form of attending his class reunions. Among many things, he will be remembered for his enjoyment of the family hunting trips to find arrowheads and Trilobites. The cruises he took with his wife to Alaska and Hawaii will always be cherished as well. He was preceded in death by his parents Cecil and Ruth Sherwood and one sister, Sharon Goff. He is survived by his wife of 58 years, Velma; daughter Jennifer Sherwood (Chris) Gross of West Chester; two sons Jeffery Sherwood (Hey Suk Lee) of Korea and Chris Sherwood of Maryland; and two grandchildren Christian and Joshua Gross. Services to celebrate David’s life will be scheduled in the near future. Additional information will be available when the arrangements have been finalized. Stubbs-Conner Funeral Home in Waynesville is serving the family. Condolences at www.stubbsconner.com. In lieu of flowers, please send donations to: Otterbein Benevolent Fund, 580 State Rt. 741, Lebanon, Ohio 45036

SHERWOOD, David L., a joyful and upbeat gentleman who loved to share the stories of his life, age 83, of Lebanon and formerly of Bel Air, Maryland, passed away Friday, July 24, 2020 at his home in the Otterbein Senior Life Community. David... View Obituary & Service Information

The family of David L. Sherwood created this Life Tributes page to make it easy to share your memories.

SHERWOOD, David L., a joyful and upbeat gentleman who loved to...

Send flowers to the Sherwood family.