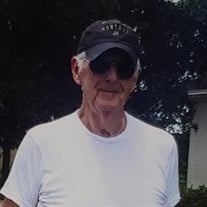 WILSON, David S., age 84, of Lakeland, Florida and formerly of Lytle (near Waynesville), Ohio, passed away Thursday, September 2, 2021 at his home in Florida. David served honorably in the United States Army. He worked approximately 20 years for DP&L in Dayton, Ohio during the earlier part of his working career and retired as a division head at the City of Lakeland in Florida after a combined 35 years of service. He was a member of the Full Gospel Tabernacle in Waynesville for many years. During his younger years, his faith led him to minister’s school. David had a strong external personality but a gentle and caring mentality to those he knew and loved, especially to his family who he adored. He was a proud member of the NRA. He was also a gunsmith and designed several unique and fantastic rifles over the years. His other hobbies included fishing, camping, and cars-both old and new. One of his favorite cars was a 2017 gunmetal gray Mustang GT. His love of fishing often led him to the shoreline of the Gulf Coast in Englewood, Florida. Being very family oriented, it became tradition over the years to travel to Dale Hollow Lake in Tennessee. The cabin rentals at Sunset Marina and the camping and bonfires at Willow Grove, complete with his wife, parents, his grandmother, and later by the children and grandchildren, resulted in many fond memories over the years. In addition, the annual picnics, complete with lawn games and cookouts during the 4th of July and Labor Day holidays, resulted in many more family memories. Among many things, he will be remembered for his love of community, specifically his willingness to always lend a hand when his neighbors needed help with their home or paying for a sudden funeral of a loved one, all done humbly and without expectations for payback. He was preceded in death by his wife, Roberta, in 2007 and his parents Stoner and Gladie Wilson. He is survived by two children Eric (Marlo) Wilson and Lynne (Steve) Rains; three grandchildren Matthew Wilson, Jacob Rains, and Caleb Rains; and his brother Marvin (Vicki) Wilson. Private family services. Stubbs-Conner Funeral Home in Waynesville is serving the family. Condolences at www.stubbsconner.com.

The family of David S. Wilson created this Life Tributes page to make it easy to share your memories.

Send flowers to the Wilson family.