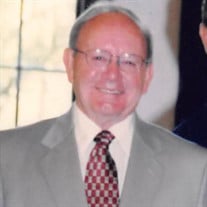 HUFFMAN, Dean, age 84, of Dayton, passed away Monday, August 9, 2021 at Ohio’s Hospice of Dayton. Dean worked a combined total of 44 years for the Dayton Tire and Rubber Company, most of his career in Dayton and officially retiring from the Oklahoma branch. In addition, he was a member of the Emmanuel Baptist Church in Dayton for many years. Helpful, giving, persistent, strong, and honest to a fault, Dean had an amazingly strong work ethic and loved both his job and hard work in general. He especially liked doing things himself and enjoyed working on his cars and projects around the house. He also enjoyed gardening and watching UK basketball. Among many things, he will be remembered for the pride he took in being able to take his family on vacation each year. The many beach vacations all along the Atlantic coastline became tradition with his family. He was preceded in death by his parents Carl and Pearl Huffman; five brothers Carl Junior, Edgar, Neal, Gene, and Wayne Huffman; and three sisters Evelyn O’Kelly, Violet Pool, and Ruth Myers. He is survived by his wife of 64 years, Yvonne; three children Carla (Hassan) Dakhteh, Dawn (Dan) Abbott, and Stuart (Ladonna) Huffman; six grandchildren Soraya (Ryan) Guthrie, Mareia Dakhteh, Aaron (Kate) Abbott, Alana (Sean) Mahley, Carly Dawn Huffman, and Nicole Gray; seven great grandchildren Aria, Jack, Stella, Asher, Loralei, Landon, and Bodhi; one brother Kyle (Shirley) Jones; and two sisters Doris Tolliver and Betty (Fritz) Stolger. Funeral services will be held 2:00 PM Friday, August 13th at Stubbs-Conner Funeral Home in Waynesville. Burial will be in Miami Cemetery, Corwin. Pastor Darrell Messer will be officiating. The family will receive friends 12:30 PM - 2:00 PM Friday at the funeral home. In lieu of flowers, contributions may be made in Dean’s honor to Ohio’s Hospice of Dayton. Condolences at www.stubbsconner.com.

HUFFMAN, Dean, age 84, of Dayton, passed away Monday, August 9, 2021 at Ohio&#8217;s Hospice of Dayton. Dean worked a combined total of 44 years for the Dayton Tire and Rubber Company, most of his career in Dayton and officially retiring... View Obituary & Service Information

The family of Dean Huffman created this Life Tributes page to make it easy to share your memories.

Send flowers to the Huffman family.