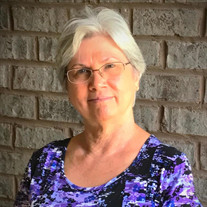 MICHEL, Deborah “Debbie” S., age 69, of Springboro, passed away Tuesday, January 11, 2022, at Kettering Medical Center. Debbie met her husband, Steve, in 1972 and raised four children together. They lived in Dayton for a few years after getting married but ultimately moved to their current home in Clearcreek Township to raise their family. Debbie was currently employed and has worked over 35 years at Grace Works Lutheran Services (formerly Bethany Lutheran Village). For most of her working years, she worked as a receptionist at the front door. Family members and residents were always greeted by Debbie with a smile and a deeply caring persona. She made connections with the residents and was loved by all. Loving, giving, generous, humble, loyal, and unselfish, Debbie’s greatest joy in life was spending time with her grandchildren. Throughout her life, working in her yard and especially caring for her dogs were her favorite pastime. Of more recent times, her little Yorkie, known as Nicholas, was one of her absolute favorites. Among many things, Debbie will be also be remembered as an excellent cook, with her BBQ meatballs and homemade noodles being among the most notable. She was preceded in death by her son, Zach Michel; one infant daughter, Angel; and her parents, Elmer and Winnie Livingston. She is survived by her husband of 49 years, Steve; three daughters, Emmy (Joe) Maggard, Mandy (Dwaine) Coffman, and Becky Michel; six grandchildren, Ellie, Marissa, Cody, Olivia, Emerson, and Everett; daughter-in-law, Sarah Michel; one sister, Lisa (Mike) Hoban; niece, Sarah (Jim) Sparks; and two nephews, Josh (Jessica) Hoban and Matthew Hoban. Private services will be held Tuesday, January 25, at Stubbs-Conner Funeral Home in Waynesville. Burial will be in Miami Valley Memory Gardens. Pastor Bill Lamb will be officiating the services. If desired, contributions may be made to St. Jude Children’s Research Hospital. Condolences at www.stubbsconner.com.

The family of Deborah "Debbie" S. Michel created this Life Tributes page to make it easy to share your memories.

Send flowers to the Michel family.