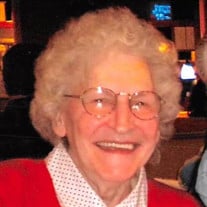 GIBSON, Dolly M., age 92, of Waynesville, passed away Tues. April 23,2019 at her residence surrounded by her family. Dolly graduated from Roosevelt High School in Dayton and was a member of the Jonah’s Run Baptist Church near Harveysburg for over 60 years. Independent, strong, caring, quiet and always positive, Dolly had a radiant smile and unconditional love for her family. She was a Christian lady to the core, which could be seen from a distance. She was very active in the Jonah’s Run Missionary Circle and other church activities. Extremely family oriented, she greatly enjoyed spending time with her grandchildren and great grandchildren and organizing family get-togethers, especially the Saturday night get-togethers. When she was younger, she also enjoyed vegetable gardening. The many family trips to her sister’s cabin at Lake Cumberland, and one memorable trip to Hawaii, were some of her favorite memories. Among the many reasons, she will be remembered by the quote she lived by, “If you can’t say anything nice, don’t say anything at all!” She was preceded in death by her husband Frank in 2013; two sons Scott Anthony Gibson and Frank Ronald Gibson; two sons-in-law Don Smedley and John Pfister; her parents Fred and Rachel Murphy; one brother Fred B. Murphy Jr.; and two sisters Gertrude Kaltenbaugh and Sylvia Ashworth. She is survived by three sons Paul (Carol) Gibson, Kevin (Cindy) Gibson, and Darren (Sandra) Gibson; two daughters Peggy Smedley and Deborah Pfister; daughter-in-law Mary Gibson; two brothers Delmar Murphy and Thomas Murphy; two sisters Janet (Otis) Powell and Judy (Ron) Bicknell; and brother-in-law Bill Ashworth. Funeral services will be held 11 AM Sat. April 27 at Stubbs-Conner Funeral Home in Waynesville. Pastor Roger Hilbert will be officiating. Burial will be in Miami Cemetery, Corwin. The family will receive friends 6-8 PM Fri. at the funeral home. If desired, contributions may be made to Jonah’s Run Baptist Church, 9614 W. St. Rt. 73, Wilmington, OH 45177. Condolences at www.stubbsconner.com.

GIBSON, Dolly M., age 92, of Waynesville, passed away Tues. April 23,2019 at her residence surrounded by her family. Dolly graduated from Roosevelt High School in Dayton and was a member of the Jonah&#8217;s Run Baptist Church near Harveysburg... View Obituary & Service Information

The family of Dolly M. Gibson created this Life Tributes page to make it easy to share your memories.

Send flowers to the Gibson family.