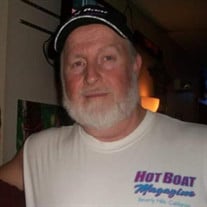 GREER, Donald “Mike”, age 69, of Centerville, passed away Friday, April 29, 2022, at his residence. Mike graduated from Kettering Fairmont, class of ’71. He earned an Associate’s Degree from Sinclair and worked for nearly 20 years for United Color Press. He retired from GM/D-Max as a Mechanical Service Technician in 2020 after nearly 30 years of service to GM. He was a member of the Waynesville American Legion Post 615. Easy-going, gentle, kind, caring, and outgoing, Mike was fun-loving and liked by all who knew him. Since the age of 12, he has enjoyed lifting weights. In addition, he liked high adrenaline activities, which included muscle cars, riding Harleys, and speedboats. He owned four different Harley Davidson motorcycles over the years, including a ’66 Sportster, an ’89 Sportster, a ’79 Super Glide, and an ’01 Low Rider. He found a common interest with his son participating in drag strip racing at Kil-Kare and Edgewater. From the time he was a small child, it was a family tradition to travel to Dale Hollow Lake for boating and lake activities. Over the past 20 years, he greatly enjoyed traveling to Wisdom Dock Marina at Dale Hollow to enjoy time with his family on his houseboat. He also enjoyed the many trips he took with family and friends to Las Vegas. Among many things, he will be remembered for how much he loved his three beloved chihuahua dogs. His parents, Donald and Norma Jean Greer, were preceded in death. He is survived by his wife of nearly 50 years, Brenda; two sons, Mike (Justine) Greer and Nathan Greer (Beth Bush); three grandchildren, Michael Greer, Skylar Tirey (Greer), and Beau Bush; great-grandson, Charlie; two sisters, Susan (Dave) Carlton and Jill (Ron) Kline; uncle, Charles (Cheryl) Greer; special friends, Rob and Kelly Priest; several nieces, nephews, and extended family members, and of course, his beloved dogs, Dusty, Zeus, and Sassy. A celebration of life service will be held at 2 PM Saturday, May 14, at the Waynesville American Legion Post 615. If desired, contributions may be made to Hospice of Dayton. Stubbs-Conner Funeral Home in Waynesville is serving the family. Condolences at www.stubbsconner.com.

The family of Donald "Mike" Greer created this Life Tributes page to make it easy to share your memories.

Send flowers to the Greer family.