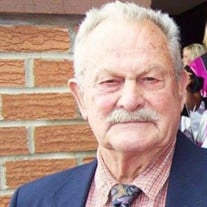 RICHARDS, Donald E., age 95, of Waynesville, passed away Tuesday, November 23, 2021, at his residence. Donald graduated from Nova High School in Nova, Ohio. After high school, he earned a Bachelor’s Degree in Education from Miami University in Ohio, a Master’s Degree in Education from the University of Washington in Seattle, and a PhD in Education from The Ohio State University. He honorably served in the United States Navy during the WWII era. He worked 25 years in education, over 10 of which were in Alaska to Native Americans in one-room schoolhouses. He served as principal of Ida Weller Elementary in Centerville and officially retired in 1974 as a professor from Wright State University. He was a member of St. Mary Episcopal Church in Waynesville, founding member and former president of the Caesar Creek Pioneer Village, and volunteered with the Waynesville Historical Society. In addition, he served as the Wayne Township Zoning Inspector for many years. Stoic, serious, thoughtful, and somewhat quiet, Donald was more of the strong silent type. He grew up in a farm family when he was young. He greatly enjoyed his career work of teaching over the years and leading in different capacities in several organizations. His favorite pastimes included vegetable gardening and traveling. Along with his late wife, they traveled extensively to such favorite destinations as the Outer Banks of North Carolina, Maine, and visited his son in Phoenix, Arizona. During most of those trips, he traveled via a motorhome, which he thoroughly loved. He also traveled with the Elder Hostel group, a senior group in Lebanon, and their Ultravan Motorhome Club. In addition, Donald purchased several rental properties over the years, which he made a priority to renovate after his retirement. His favorite traditions included cooking hominy in a big iron kettle for the Pioneer Village and how much he enjoyed getting together with family during Thanksgiving. He was preceded in death by his wife Estella in 2017, his parents Victor and Ruth Richards, and his brother Stanley Richards. He is survived by three children Roderick (Christa) Richards, Jeffery (Rebecca) Richards, and Victoria (Tim) Huber; 11 grandchildren Rachael (Gilbert) Olaguez, Gianluca Richards, Mateo Richards, Angela (Tony) Guerrero, Emily (Jeremy) Franks, Nathan (Rebecca) Richards, Katie (Keith) Gadacz, Elizabeth (Wesley) Buckhart, Anna (Brad) Umstead, Eric Huber, and Jasmine Huber; and 10 great-grandchildren Erin, Estella, Eleanor, Elizabeth, Torii, Taylynn, Eli, Cambridge, Callihan, and Maddison. The family will receive friends 10:00 - 11:30 AM Tuesday, November 30 at Stubbs-Conner Funeral Home in Waynesville. Mass of Christian Burial will immediately follow the visitation on Tuesday at the funeral home. Bishop Joseph Cory Pfeiffer will be officiating the mass. Condolences at www.stubbsconner.com.

The family of Donald E. Richards created this Life Tributes page to make it easy to share your memories.

Send flowers to the Richards family.