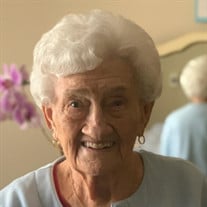 KELLEY, Dopsy E., age 94, of Middletown, passed away Tues. May 28, 2019 at Hospice of Butler/Warren County. Dopsy was born in Beattyville, Kentucky. Her husband, Jesse, was an iron worker and they moved around the United States during his career. They greatly enjoyed seeing the nation. When he was assigned to construct the first launching pad for the spaceflight at Cape Canaveral they decided to take permeant residence at Mims, Florida. They lived there for more than 50 years. Dopsy recently moved back to Ohio in Nov. 2018 so that her family could help her with her needs. Dopsy owned and operated a restaurant for several years. In addition, she worked at Patterson Field, putting new window shields in bomber planes for the war, during her younger days. She had recently become affiliated with the Dixie Highway Christian Center. With her husband, she attended 44 Kentucky Derby’s. She won a dance contest in the 40’s and was a picture model for a photographer studio. She had a wonderful life! Happy, fun-loving, and bubbly, Dopsy enjoyed flowers, butterflies, and keeping her fingernails beautifully decorated. Chocolate pies, Kit Kats, and Pepsi were her favorite treats. She was preceded in death by her husband Jesse in 1999; her parents John “Lucian” and Delilah Shearer; six brothers Charlie, Rodney, Willis, Montford, Orville, and Cecil Shearer; and three sisters Lillie Johnson, Dorothy Snowden, and Thelma Francis. She is survived by her brother Carl Shearer and many nieces, nephews, and extended family members. A memorial service will be held 11 AM Sat. June 15 at Dixie Highway Christian Church, 5287 S. Dixie Hwy, Franklin, OH 45005. Stubbs-Conner Funeral Home in Waynesville is serving the family. If desired, contributions may be made to her hairstylist, Helen, for residents of Bickford that are short on money for hair appointments: Brickford of Middletown, Attn: Helen, 4375 Union Rd, Middletown, Ohio 45005. Condolences at www.stubbsconner.com.

KELLEY, Dopsy E., age 94, of Middletown, passed away Tues. May 28, 2019 at Hospice of Butler/Warren County. Dopsy was born in Beattyville, Kentucky. Her husband, Jesse, was an iron worker and they moved around the United States during his... View Obituary & Service Information

The family of Dopsy E. Kelley created this Life Tributes page to make it easy to share your memories.

Send flowers to the Kelley family.