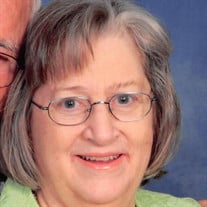 FARLEY, Doris L., age 73, of Waynesville, passed away peacefully Saturday, June 20, 2020 at her residence surrounded by her family. Doris fought a long battle with liver disease. There is thankfulness in for God’s promises and that she is now in His presence and no longer suffering. One of the greatest rewards you can have in life is being a servant of the Lord. Doris lived these words in every aspect of her life. For over 28 years, she was known as the local babysitter to those that lived in Waynesville. She took great pride and joy in her job, but most importantly to the children she babysat for. She treated each child like they were her own. As the children grew into adults, they would come back and thank her for everything she did and for making them feel like a part of her family. She was a member of the First Baptist Church in Waynesville and took her position of being a member very seriously. She volunteered with many activities at the church over the years: from Sunday School, to helping with the meals, to being part of the Hospitality Committee, and being the Nursery Director. Doris was beautiful on the inside and out. She had a passionate heart that would give when others needed it the most. She was a great advice giver and would often encourage others to do whatever it took to achieve their dreams. She loved seeing others succeed. Cooking was another passion she acquired, anything from chocolate gravy over biscuits to her specialty, southern style fried chicken. She loved to cook for anyone and everyone. Simple was not just a word to Doris, but when the family had get-togethers there was nothing simple about it. The family will also remember how she would prepare the feast and still have enough food for five or six more families. She continued to cook until it became too hard and she no longer could. Her greatest joy was her family, especially loved her grandkids. She greatly enjoyed the family camping trips at Dale Hollow Lake, and this love for the camping trips extended to her sons and their families. Her sons both feel that they are who they are due to their parents, being great models and teaching them about the Lord. She was preceded in death by her parents Freeman and Vena Watson and two sisters Marguerite Stapleton and Emma Lee Watson. She is survived by her husband of 57 years, Julian; two sons Julian (Angie) Farley Jr. and Jarome Farley (Robyn Gosbee); six grandchildren Abe Farley, Reed Farley, Zeb (Brittany) Farley, Ema Farley, Mya Farley, and Xin Farley; one great grandson Brayden; and one brother Dean (Awona) Watson. Funeral service will be 1 PM, Wednesday, June 24 at the First Baptist Church in Waynesville. Pastor Dale McCloud and Philip Hopper will be officiating. Burial will be at Miami Cemetery in Corwin. The family will receive friends 5 – 8 PM Tuesday, June 23 at the church. Stubbs-Conner Funeral Home in Waynesville is serving the family. In lieu of flowers, contributions can be made to the Hospitality Committee of the Waynesville First Baptist Church and / or Crossroads Hospice. Condolences at www.stubbsconner.com.

FARLEY, Doris L., age 73, of Waynesville, passed away peacefully Saturday, June 20, 2020 at her residence surrounded by her family. Doris fought a long battle with liver disease. There is thankfulness in for God&#8217;s promises and that she... View Obituary & Service Information

The family of Doris L. Farley created this Life Tributes page to make it easy to share your memories.

Send flowers to the Farley family.