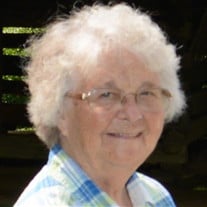 CARTER, Dorothy J. (née Wilson), age 84, of Waynesville, passed away peacefully Thurs. Aug. 24, 2017 at the home she spent all but 11 years of her life in, surrounded by her family. Dorothy graduated from Waynesville High School, class of '51. She was a homemaker for 33 years and then retired after working 10 years for the Mary L. Cook Public Library in Waynesville. Dorothy was a member of the Waynesville United Methodist Church, Cades Cove Historical Society, and the Waynesville Historical Society. Dorothy was a cheerful person with a servant's heart. She was always willing to help others when the need arose. As a genealogy enthusiast, she loved researching and discovering new branches of the family tree. She relished every opportunity to gather the family together and looked forward to updating her charts and visiting with her extended family at the annual reunions. Her guidance, discipline, caring, and love were given not only to her own children but to the many children she cared for while their parents worked away from home. She also enjoyed watching the birds in the winter and tending to her flowers in the springtime. She was preceded in death by her parents Russell N. and Mabel E. (née McMillan) Wilson and one sister Miriam A. Heimbouch. She is survived by her husband of 63 years, Allie; five children Phyllis (Steve) Suchy, Richard (Kelly) Carter, Nancy (Brian) Johnson, Allen (Julie) Carter, and Joe (Shannon) Carter; six grandchildren Michael (Shanda) Carter, Kyle Johnson, Kevin (Katie) Carter, Allie Carter, Andrew Carter, and Wesley Smith; three great grandchildren Alayna, Abigayle, and Gavyn; and one brother Donald R. Wilson. Funeral services 11 AM Mon. Aug. 28 at Stubbs-Conner Funeral Home, Waynesville. Burial will be in Miami Cemetery, Corwin. The family will receive friends 5-8 PM Sun. at the funeral home. In lieu of flowers, contributions may be made to Hospice of the Miami Valley, Waynesville United Methodist Church or the Wayne Twp. Fire and Rescue Squad. Condolences at www.stubbsconner.com.

CARTER, Dorothy J. (née Wilson), age 84, of Waynesville, passed away peacefully Thurs. Aug. 24, 2017 at the home she spent all but 11 years of her life in, surrounded by her family. Dorothy graduated from Waynesville High School, class of... View Obituary & Service Information

The family of Dorothy J. Carter (Wilson) created this Life Tributes page to make it easy to share your memories.

Send flowers to the Carter family.