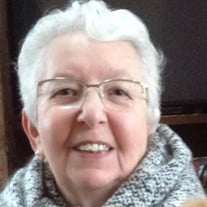 MILLARD, Dorothy T., age 89, of Waynesville and formerly of Bridgeport, PA, passed away Monday, October 26, 2020 at her residence. She would want her friends and family to know that while her passing was sudden and unexpected, even to her, she was in no pain and was sitting up in the loving embrace of her daughter when she closed her eyes and passed away. Dorothy was an active member of St. Augustine Catholic Church in Waynesville. In addition to other important church related activities, she enjoyed assisting the church with the annual Ohio Sauerkraut Festival selling their popular cabbage rolls. Her homemade snickerdoodles will always be remembered by the volunteers. Independent, intelligent, classy, confident and adventurous, Dorothy could also be silly at times. She was always loving and caring. She was always up for something new and was fun to be around. She treasured her family and friends over everything else. She grew up during the Depression but felt fortunate that her family always had enough to eat because her dad worked at a grocery store and was allowed to bring home the unsold produce. At the time, her life centered on less than one square block. Her aunt and cousins lived in the other half of their double brick row house. Her Catholic Church and school were right next door. She did not even have to cross the street. Then she married and moved to the Navy Base in Connecticut. Her new husband immediately shipped off to sea for six months in a submarine. She learned to live on her own. She adjusted to the six months home - six months at sea schedule while raising two preschool children. She was thrilled when her husband was stationed in Greece. She learned to speak Greek, her family fully immersed themselves into the Greek culture, and they all developed a love for travel. After her husband retired from the Navy she returned home to Pennsylvania. He became the Building Inspector for Plymouth Meeting PA. She managed a home heating and fuel company. They turned down the opportunity to buy the company so that they had time to focus on family. She loved her annual trips with her husband to the shore and the Poconos. Her life took a new turn after her husband retired for a second time and her daughter asked for help with her one year old and next baby on the way. She moved her family to Waynesville to love and care for her granddaughters. She said she wanted her daughter to continue to use her law degree. But caring for baby Charis with her big brown eyes was the real reason for the move. She felt welcomed by Waynesville. She got to enjoy her love of gardening, oil painting, reading, baking and traveling. She became the President of the Waynesville Garden Club and won many ribbons at the State Fair. She traveled often with senior citizens groups going as far as Hawaii and Alaska. But her favorite trips were often the local day long mystery trips. She accompanied her daughter on many business trips, exploring by herself during the day while her daughter was working. One trip to Germany, she not only explored by herself, she took care of her daughter who had gotten chicken pox from the grandchildren right before they left. Most recently, she traveled with her daughter and granddaughters to Mexico and Costa Rica. They were planning for the next chapter when her daughter retired and they would both move somewhere sunny but accessible to her greatgrandchildren. She was preceded in death by her husband, Joseph, in 1998; her son Patrick Millard; her parents Andrew and Mary Saboe; and her sister Betty Estock. She is survived by her daughter and son-in-law Pamela and Michael Stanek; two granddaughters Shavonne and Charis Stanek; and one sister Mary Ostroski. A memorial mass will be held 10:30 AM Thursday, November 5, 2020 at St. Augustine Catholic Church in Waynesville. Stubbs-Conner Funeral Home in Waynesville is serving the family. Dorothy was well known by the love and care she showed for others. In her memory, you are encouraged to reach out and do something nice or caring for a friend, family member or stranger while remembering her. Condolences and Photo Tribute at www.stubbsconner.com.

MILLARD, Dorothy T., age 89, of Waynesville and formerly of Bridgeport, PA, passed away Monday, October 26, 2020 at her residence. She would want her friends and family to know that while her passing was sudden and unexpected, even to her, she... View Obituary & Service Information

The family of Dorothy T. Millard created this Life Tributes page to make it easy to share your memories.

MILLARD, Dorothy T., age 89, of Waynesville and formerly of Bridgeport,...

Send flowers to the Millard family.