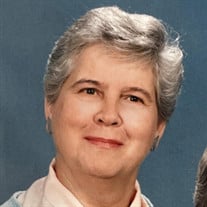 Van Atta, Dorothy B. “Dottie”, 95, of Waynesville, passed away Sunday, February 6, 2022, at her home surrounded by her family. She was born in Dayton and graduated from Stivers High School in 1945. She was a member of St. Paul’s Lutheran Church and Christ United Methodist Church in Kettering, where she and her husband of more than 60 years raised their three boys. She was known for her wonderful sense of humor, generosity and willingness to help out, all traits that endeared her to many. She was a loyal friend and had many close friends throughout her life. Among them were friendships she maintained since her days in elementary school. The loving and supportive mother was active in PTA, Boy Scouts and their neighborhood club, where she helped organize annual block parties and skits for the children. She was proud of her German heritage and enjoyed hosting family dinners with recipes passed down from her childhood. Her interests included working crossword and sudoku puzzles. She was an avid bowler, golfer and bridge player, making many friends in the leagues she participated in throughout the years. Dottie was preceded in death by her husband, Albert, in 2010, parents Louis and Cora Baller, sister and brother-in-law Marie and Tom Cleary, and brother and sister-in-law Robert and Patricia Baller. She is survived by sons Douglas (Beverly) Van Atta, Jeffrey (Mary Ann) Van Atta, and Steven (Melanie) Van Atta; 17 grandchildren, Shannon, Matthew, Kathryn (Daryl Vanmercetta), Emily (Mike McManus), Valerie (Jon Stubbs), Alexander, Adam (Alexandria Benham), Samantha (Evan Pridmore), Natalie, Carolyn, Ellen, Mary Clare, Jacob, Grace, Chelsey, Lauren, and David; 16 great-grandchildren; niece Peggy Aracri, with whom she was very close; and other nieces, nephews and close friends. The family will receive friends from 1 to 5 p.m. Saturday, February 19, at the home of Jeff and Mary Ann Van Atta. Stubbs-Conner funeral Home in Waynesville is serving the family. If desired, contributions may be made to the charity of your choice in Dottie’s memory. Condolences at www.stubbsconner.com

The family of Dorothy B. "Dottie" Van Atta created this Life Tributes page to make it easy to share your memories.