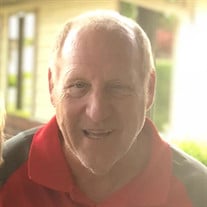 WHITSEL Jr., Earl W., age 69, of Waynesville, passed away Tuesday, October 27, 2020 at Kettering Hospital. Since 1986, Earl has owned and operated ICE Inc., an electrical controls engineering company. He was a member of the Bethany Baptist Church in Clarksville, where he loved serving others in God’s name. Outgoing, enthusiast, charitable, vibrant, and compassionate, Earl did not know a stranger. If you knew Earl, you would know that he was full of life and could not whisper if he had to. He was a family man and took every opportunity to be around his family members. He was musically talented and could play a variety of instruments including the guitar, electric guitar, bass, banjo, piano, and organ. Earl also enjoyed riding his motorcycle. For several years, he and his wife traveled together to Puerto Vallarta, Mexico, the Bahamas, and Cape Code where they made lots of incredible memories, but their favorites trips were the mountains and lakes of Tennessee. He loved fishing and boating, and took every opportunity to be on the water. Over the years, he spent time on Caesar’s Creek Lake, Lake Erie, annual trips to Lake Cumberland for boating and camping before the kids went back to school, and at his lake house at Cherokee Lake in Tennessee. He especially enjoyed having his family on the water with him, which he exhibited with his creation of “Treasure Island.” Treasure Island was a treasure hunt he created for his grandchildren, whereby he buried little treasures to be found at one of the barrier islands on Cherokee Lake, complete with a treasure map to follow. Among many things, he will also be remembered for how much he loved the Thanksgiving and Christmas holidays, when family gathered. He was preceded in death by his parents Earl W. Sr. and Sylvia Whitsel and one brother Gary Whitsel. He is survived by his wife of 19 years, Janet; four sons John, Jeremiah (Amy), Jacob (Karrie), and Joseph Whitsel; three daughters Jennifer (Michael) Green, Joy Whitsel, and Jill (Cliff) Ard; 11 grandchildren Kaleb, Reece, Michael, Brayden, Connor, Jackson, Natalie, Ezra, Evelyn, and Piper; two brothers Doug and Bruce Whitsel; and three sisters Karen (Ron) Stevens, Susan (Larry) Radtke, and Debbie Whitsel. Funeral services 1 PM Monday, November 2 at Stubbs-Conner Funeral Home in Waynesville. Burial will be in Miami Cemetery, Corwin. The family will receive friends 11 AM - 1 PM Monday at the funeral home. During this difficult time, if you are feeling ill or unhealthy in any way, you are encouraged to pay your respects in alternative methods, such as sending a sympathy card or sharing a memory though our online tribute wall. In addition, the services will be streamed live via the internet. If you wish to view the services on the live stream, please reach out to the funeral home to be added to the list. Be sure to bring your mask to wear while you are inside the funeral home. Condolences at www.stubbsconner.com.

WHITSEL Jr., Earl W., age 69, of Waynesville, passed away Tuesday, October 27, 2020 at Kettering Hospital. Since 1986, Earl has owned and operated ICE Inc., an electrical controls engineering company. He was a member of the Bethany Baptist... View Obituary & Service Information

The family of Earl W. Whitsel Jr. created this Life Tributes page to make it easy to share your memories.

Send flowers to the Whitsel family.