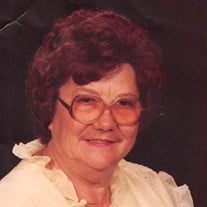 CRUMP, Era “Helen” B., age 93, of Waynesville, passed away Wednesday, September 11, 2019. She was born May 27, 1926 to Alec and Maggie Matherson in Sylacauga, Alabama. Helen worked as a beautician out of her home for over 25 years. In addition, she also worked a few years in the kitchen at Wayne Local Schools and a couple more years at Centerville Schools. The position she was most proud of however, was being a mom. She was a faithful member of the First Baptist Church in Waynesville for many years. Helen was a fun loving and devoted mother, grandmother, great grandmother, and great great grandmother. In addition, she served as a foster mom to several children over the years. She had a playful side and absolutely loved to tease and pull practical jokes on people. She took every opportunity to scare or startle others by doing such things as pretending a big dog was in the basement, purposely putting pepper in a chocolate pie, and bringing a pony into her home. She also greatly enjoyed gardening in her free time and collecting porcelain snow angel figurines. Among the many things, she will be remembered for her love of coffee and Coca Cola, and for her homemade biscuits and gravy. Back when her late daughter served on the fire department, she enjoyed cooking her delicious biscuits and gravy for the first responders during the Sauerkraut Festival. She was preceded in death by her husband Loyd F. in 1992, one daughter Helen Gross; great grandson Jonathan Frye, her parents, six brothers, and five sisters. She is survived by three children Mary (Joe) Myers, Loyd L. (Debra) Crump, and Alice (Jim) Deatherage; five grandchildren Cindy Durbin, Sandy (Randy) Bertram, Amanda (Chip) Rist, Melissa (Rick) Hoffman, and Gary (Kristin) Atkins; five great grandchildren; and 15 great great grandchildren. Funeral services will be held 11 AM Monday, September 16 at Stubbs-Conner Funeral Home in Waynesville. Roger Dale McCloud will be officiating. Burial will be in Miami Cemetery, Corwin. The family will receive friends 5-8 PM Sunday at the funeral home. If desired, contributions may be made to Hospice of Dayton. Condolences at www.stubbsconner.com.

The family of Era "Helen" B. Crump created this Life Tributes page to make it easy to share your memories.

Send flowers to the Crump family.