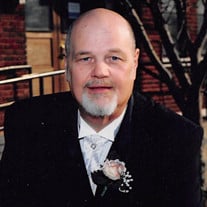 LAWSON, Ernest “Ernie” W., age 69, of Franklin and formerly of Waynesville, passed away Sunday, October 25, 2020. Ernie graduated from Monroe High School and attended Miami University in Oxford for his undergraduate work. He worked as a case manager for the Talbert House for several years and served as state treasurer and pastor for Ohio Christian Union. He also served as pastor for the Waynesville Christian Union Church and the Dayton Christian Union Church. He was an active member of the Lebanon Masonic Lodge #26, Lebanon Eastern Star, Warren County Shrine Club, Scottish Rite Valley of Dayton, York Rite, and the Waynesville Lions Club. In addition, he served two terms as a councilman and mayor for the Village of Waynesville. He was currently attending the Harvest Point Church of God in West Carrollton. Loving, caring, kind, thoughtful, selfless, and intelligent, Ernie was gentle and yet could be stern and to the point. In his younger days, he played football at school for Franklin and Monroe. His love of football carried over to his adult years where he coached multiple youth football teams over the years. He had a real passion for coaching football to kids, teaching that competitive spirit and the meaning of being a team. Over the years, he coached in the school districts of Carlisle, Middletown Christian, and Waynesville, and at the Middletown YMCA. Of course, he also enjoyed watching football, with the Cincinnati Bengals being his favorite team. He was an avid reader, mostly focusing on topics involving history, politics, and religion. He loved playing chess and had quite the collection of chess games made from different materials. Among many things, the trips he made to Kentucky for family reunions became one of the memories that will always be cherished. He will also be remembered for his love of peanut butter fudge, cornbread, and unsweet tea. He was preceded in death by his father Carl Lawson; mother and stepfather Jean and Johnny Hazelwood; brother Carl D. Lawson; and one sister Beverly McKeever. He is survived by his loving wife, Lisa; two sons James Lawson and Jon (Melody) Lawson; two daughters Amy (Daryl) Reffitt and Anna Lawson; stepchildren Brian Tipton and Tonya (Rob) Dellaposta; 10 grandchildren Shelbi, Ashlee, Justen, D.J., Alex, Kody, Caleigh, Maddy, Katie, and Ewell; step grandchildren Taylor, Brandon, Rose. Alaina, and Levi; six great grandchildren Elliott, Jack, Kolton, Sage, Jensen, and Ava; step great grandson Cayden; and one sister Kathy (Cary) Eblin. The family will receive friends 5-8 PM Thursday, October 29 at Stubbs-Conner Funeral Home in Waynesville. Funeral services will be held 11 AM Friday at the funeral home. Burial will be in Miami Cemetery, Corwin. During this difficult time, if you are feeling ill or unhealthy in any way, you are encouraged to pay your respects in alternative methods, such as sending a sympathy card or sharing a memory though our online tribute wall. In addition, the services will be streamed live via the internet. If you wish to view the services on the live stream, please reach out to the funeral home to be added to the list. Be sure to bring your mask to wear while you are inside the funeral home. Condolences at www.stubbsconner.com.

The family of Ernest "Ernie" W. Lawson created this Life Tributes page to make it easy to share your memories.

Send flowers to the Lawson family.