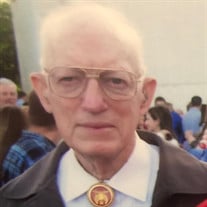 SMITH, Ernest D., age 88, passed from this life Thursday, January 7, 2021. He was born in Jackson, Kentucky (South Fork) to parents Nathan Sr. and Ellis (Prater) Smith, but lived around the Waynesville area most of his life. Ernie served as a combat medic in the Army during the Korean Conflict for 15 1/2 months. He also served the Church of Christ as a deacon and elder for many years, and a current member of the Spring Hill Church of Christ. In addition to being a member of the Waynesville American Legion Post 615 and Lebanon VFW, Ernie was a member of the Lebanon Masonic Lodge #26; Scottish Rite, Valley of Dayton; Council, Chapter, and Commandrey York Rite; White Shrine of Jerusalum in Dayton; Syrian Shrine in Cincinnati; and New Burlington Order of Easter Star. He was also a Kentucky Colonel and Kentucky Admiral. He was preceded in death by his former wife, Edith; step daughter Judy Weir; his parents; five brothers Burnis, Hubert, Charles, Nathan Jr., James, and Cleon Smith; and his sister Nell Schoonover. He is survived by his wife of 18 years, Kathaleen; daughter Eileen (Larry) Cornett; step daughter Betty (Ronnie) Burton; two grandchildren Stacey and Chelsey; step grandchildren Sherry and Ronnie; two great grandchildren; and three step great grandchildren. Funeral services will be held 1 PM Tuesday, January 12 at Stubbs-Conner Funeral Home in Waynesville. Burial will be in Miami Cemetery, Corwin. Pastor Bob Stacey will be officiating. The family will receive friends 6 - 8 PM Monday at the funeral home. Masonic and Scottish Rite services will immediately following the visitation at 8 PM on Monday at the funeral home. During this difficult time, if you are feeling ill or unhealthy in any way, you are encouraged to pay your respects in alternative methods, such as sending a sympathy card or sharing a memory though our online tribute wall. In addition, the services will be streamed live via the internet. If you wish to view the services on the Webstream, please click the link accessible from tribute wall tab of Ernie's page on www.stubbsconner.com. Be sure to bring your mask to wear while you are inside the funeral home. Condolences at www.stubbsconner.com.

SMITH, Ernest D., age 88, passed from this life Thursday, January 7, 2021. He was born in Jackson, Kentucky (South Fork) to parents Nathan Sr. and Ellis (Prater) Smith, but lived around the Waynesville area most of his life. Ernie served... View Obituary & Service Information

The family of Ernest D. Smith created this Life Tributes page to make it easy to share your memories.

Send flowers to the Smith family.