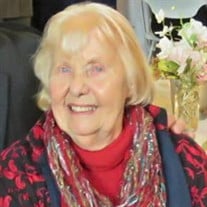 RICHARDS, ESTELLA A. “Mic” age 91, of Waynesville, passed away Sun. Dec. 31, 2017 at her residence. Estella earned an undergraduate degree from Miami University in Oxford and received a master’s from Wright State University and was a certified Reading Specialist. She also studied mining at the School of Mines, University of Alaska, Fairbanks, AK. Estella started teaching in remote one room schoolhouses in Alaska and later taught first grade for many years at Waynesville Elementary School until she retired. She was a member of the St. Mary’s Episcopal Church in Waynesville. She was very active in the Progressive Women’s Club, Garden Club, and Historical Society, all in Waynesville. Estella and her husband, Donald, were some of the founding members of the Caesar’s Creek Pioneer Village. They started the original festivals, moved cabins, and helped plant the herb gardens. She was known to have an adventurous spirit and loved to camp and travel. She was a member of Thousand Trails Camping and the Ultravan Club. During the summers while in Alaska, she and Donald were known to catch salmon and halibut from their fishing trawler the “Mickey”, and enjoyed camping, hiking, kayaking and berry picking. She was well known in the area for her beautiful and bountiful gardens. She was preceded in death by her parents Dennis and Grace Springer; two brothers Joseph and Jim Springer; and two sisters Ruth Andersen and Helen Cato. She is survived by her husband of 70 years, Donald; two sons Rod (Christa) Richards and Jeff (Rebecca) Richards; one daughter Vicki (Tim) Huber; seven grandchildren Rachael, Gianluca, Mateo, Angela, Emily, Nathan, and Katherine; four step grandchildren Eric, Jasmine, Elizabeth, and Anna; four great grandchildren Erin, Cambridge, Estella, and Eleanor. Memorial service 1 PM Sat. Jan. 13 at St. Mary’s Episcopal Church, 107 S 3rd St, Waynesville. The family will receive friends 11AM - 1 PM Sat. Jan. 13 at the church. Stubbs-Conner Funeral Home in Waynesville is serving the family. If desired, contributions may be made to the Progressive Women’s Club of Waynesville, Waynesville Historical Society, and Waynesville Garden Club. Condolences at www.stubbsconner.com.

RICHARDS, ESTELLA A. &#8220;Mic&#8221; age 91, of Waynesville, passed away Sun. Dec. 31, 2017 at her residence. Estella earned an undergraduate degree from Miami University in Oxford and received a master&#8217;s from Wright State University... View Obituary & Service Information

The family of Estella A. "Mic" Richards created this Life Tributes page to make it easy to share your memories.

Send flowers to the Richards family.