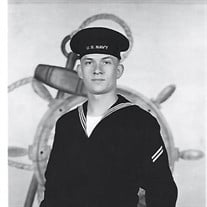 COMBS, Eugene “Gene” S., a fine Christian gentleman, age 88, of Waynesville, passed away Thursday, May 20, 2021 at Ohio Living Quaker Heights in Waynesville. Gene served his country honorably during the Korean Conflict in the Navy, first in San Diego during training and then Norfolk, Virginia mostly. He retired from Delco Products in 1998 after 22 years of service. He was a longtime member of the Ferry Church of Christ/Crossview Christian in Waynesville, but had recently been attending the Heritage Christian Church in Centerville. He was also a member of the Waynesville American Legion Post 615. Quiet, humble, caring, respectful, selfless, and giving, Gene was devoted to God, his family and to his church. He was quite the handyman and could fix anything. He especially enjoyed woodworking, and became known for his homemade country wooden clocks that he often gave out as wedding gifts. He also enjoyed attending his grandson’s BMX races in his free time. Among many things, he will be remembered for how much he and his family enjoyed traveling to the Smokey Mountains with his brother’s family in the spring and fall, ultimately staying in a condo that they purchased. They will also remember a long meandering western travel loop through New Mexico, Arizona, California, Las Vegas, and Colorado that created many family highlights. One of those highlights included getting to see the Carpenters perform in concert in Las Vegas. In addition, a family trip in 1975 to Washington D.C. in a new Pontiac just before the Bicentennial will always be a cherished time in Gene’s life. He was preceded in death by his parents Charles and Hazel Combs and one brother Charles Combs. He is survived by the love of his life who shared a marriage of 67 years, Marilyn; two sons Barry (Kimberly) Combs and Doug (Sherry) Combs; four grandchildren Benjamin (Ashley) Combs, Rebekkah (Billy) Gosney, LeAnn (Drew) Long, and Tessa (Mick) Roth; seven great grandchildren Maddy, Dakotah, Rachel, Ridge, Elizabeth, Ben, Eleanor, and one on the way; and sister-in-law Esther Combs. Funeral services will be held 12 PM Friday, June 4 at Stubbs-Conner Funeral Home in Waynesville. Burial will be in Miami Cemetery, Corwin. Pastor Scott Gorsuch will be officiating. The family will receive friends 10 AM - 12 PM Friday June 4 at the funeral home. If desired, contributions may be made to Ohio Living Quaker Heights. Condolences at www.stubbsconner.com.

The family of Eugene "Gene" S. Combs created this Life Tributes page to make it easy to share your memories.

Send flowers to the Combs family.