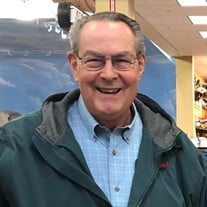 SMITH III, Fred “Dick” R., age 77, of Waynesville and formerly of Indiana and Pennsylvania, passed away Friday, October 30, 2020 at his residence. Fred served as a Captain in the United States Air Force, Strategic Air Command Division, as a Commander on a Titan II Missile Crew. He earned a Bachelor of Art degree in Economics in 1965 from DePauw University in Greencastle, Indiana, where he was an active member of the Sigma Chi Fraternity. He worked 30 years for US Steel and another 12 more years for AK Steel, retiring as the Corporate Director of Safety in 2009. Following retirement until 2015, he served as an Industrial Safety Consultant. He was a faithful member of the Heritage Christian Church in Bellbrook. Bigger than life, always joking, strong. happy, compassionate, upbeat, and enthusiast, Fred was a born leader who was always concerned with the needs of others. He was a high school diving coach at Lake Central High School in Indiana. The way in which he coached via encouragement, care, and an upbeat positive attitude was also the way he interacted with those he loved, from his marriage to the kind of dad he was with his children. He lived every day like it was his best day, constantly striving to make other laugh and join in his fun. He raced for several years in Stock Eliminator Class, NHRA Drag Racing. He also enjoyed muscle cars, weight lifting, karate, and landscaping. He mainly picked up karate to do something exciting with his sons. The annual, often times semi-annual, trips to Walt Disney World in Florida with his wife and family were some of his fondest times. He loved taking his family to Disney, enjoying the experience and excitement every bit as much as his kids. The love of Disney began on his honeymoon and continued well into his kids’ adult years. Among many things, the love and joy he had for the Christmas season will always be remembered. He went all out during the Christmas holiday with decorations, music, and spirit that could not be matched. Above all however, his faith and testimony in Jesus Christ was his most important attribute. He was preceded in death by his parents Fred R. and Irene Smith Jr. and one sister Carol Lou Smith. He is survived by his wife of 37 years, Patricia; six children Fred R. (Andrea) Smith IV, Brian (Bethany) Smith, Rachel Smith, Christina (Jose) Marquez, Sandra (Rick) Lenth, and Wendy Smith; 16 grandchildren; and one sister Linda (Jack) Gillen. Funeral services will be held 11 AM Thursday, November 5 at Stubbs-Conner Funeral Home in Waynesville. Pastor Randy Snyder will be officiating the services. Burial will be in Miami Cemetery, Corwin. The family will receive friends 5 - 8 PM Wednesday at the funeral home. In lieu of flowers, contributions may be made to the Mesothelioma Applied Research Foundation at www.curemeso.org. During this difficult time, if you are feeling ill or unhealthy in any way, you are encouraged to pay your respects in alternative methods, such as sending a sympathy card or sharing a memory though our online tribute wall. In addition, the services will be streamed live via the internet. If you wish to view the services on the live stream, please reach out to the funeral home to be added to the list. Be sure to bring your mask to wear while you are inside the funeral home. Condolences at www.stubbsconner.com.

The family of Fred "Dick" R. Smith III created this Life Tributes page to make it easy to share your memories.

Send flowers to the Smith family.