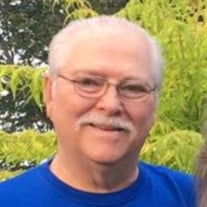 COLLINS, Gary H., age 76, of Wilmington, passed away peacefully on March 20, 2020, at Four Seasons of Washington Nursing & Rehab Center. Gary was born May 13, 1943 in Detroit, Michigan, the son of the late Howard Collins and Hazel (Bennett) Collins. He was a 10-year Veteran of the United States Navy, serving during the Vietnam War. Specifically, he served on the USS Saratoga, the USS Coral Sea, and the USS Independence aircraft carriers during his time in the service. He also served in the Army National Guard for 1 ½ years. In addition, he was a member of the Wilmington American Legion, Post 49. He was very proud of his service time to this great country. His mechanical knowledge and skills gained in the military carried him to various professions throughout his life. Gary was known by his friends and family to enjoy listening to Christian music and watching college football, drag racing, and NASCAR. In the 1980’s and 1990’s, he routinely drag-raced motorcycles and cars at area tracks. During one of Gary’s most memorable days, he finished in the top 10 out of more than 200 participants at a Chrysler Classic event in Norwark, Ohio. He was also a big fan of University of Michigan football, maintaining season tickets for several years. He is survived by his wife of 37 years, Terri; son, Garrett Collins (Audrea Fulton) of Wilmington, daughter, Heather Mullen of Michigan; grandchildren, Greyson Collins, Aveyah Collins, Ayden Mullen, and Josi Mullen; sisters, Phyllis (Ed) Harned of Georgia, and Debbie (Mark) Gonzalez of Arizona; father-in-law and mother-in-law, Theodore and Karen Miller, and other loving in-laws, nieces, and nephews. In addition to his parents, he is preceded in death by one nephew, Jimmy Jentz, as well as his canine best friend, Samson. A private graveside service will be held at the convenience of the family. Burial will take place at Miami Cemetery, Corwin, Ohio. Stubbs-Conner Funeral Home, Waynesville, is serving the family. The family wishes to thank the staff of the Clinton County Adult Day Center for their wonderful care over the past 2 years, Four Seasons of Washington Nursing & Rehab Center, and Heartland Hospice Care. Memorial donations can be directed to Heartland Hospice Care, 3131 S. Dixie Dr., Suite 208, Dayton, OH 45439 and/or the Alzheimer’s Association, P. O. 96011, Washington D.C. 20090-6011. Condolences at www.stubbsconner.com.

COLLINS, Gary H., age 76, of Wilmington, passed away peacefully on March 20, 2020, at Four Seasons of Washington Nursing & Rehab Center. Gary was born May 13, 1943 in Detroit, Michigan, the son of the late Howard Collins and Hazel (Bennett)... View Obituary & Service Information

The family of Gary H. Collins created this Life Tributes page to make it easy to share your memories.

Send flowers to the Collins family.