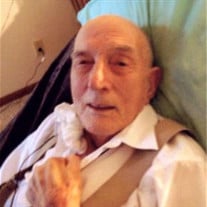 RICE, Gene age 92 of Wilmington and formerly of Waynesville passed away Sat. June 21, 2014 at Clinton Memorial Hospital. Born Nov. 9, 1921 in Booneville, KY to the late Chester and Esther Rice. Gene was a WWII Army veteran, having served in... View Obituary & Service Information

The family of Gene Rice created this Life Tributes page to make it easy to share your memories.

RICE, Gene age 92 of Wilmington and formerly of Waynesville passed...

Send flowers to the Rice family.