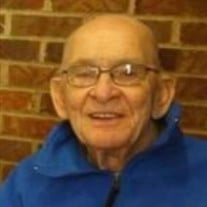 BOWDEN, George J., age 90, of Miamisburg and formerly of West Carrollton and Waynesville, passed away Friday, September 10, 2021. George retired as a plant manager from DP&L in 1996 after 30 years of service to the company. He was a member of St. Augustine Catholic Church in Waynesville. George was very family-oriented and will be especially remembered for being a wonderful husband and father. His hobbies included rooting on his favorite teams, which were the Cincinnati Reds and the Cleveland Browns. Being one of eight siblings, he was close to his brothers and sisters. His traditions involved being with family, especially during holidays and the yearly trips to Myrtle Beach, South Carolina. Over the years, starting with the families of his siblings and continuing with his kids, he enjoyed many sunsets, oceanside restaurants, walks on the beach, and rides in his golf cart. He will also be remembered for how much he meticulously cared for his yard. He was preceded in death by his parents George Sr. and Wilma Bowden; two brothers Billy and Richard Bowden; and five sisters Doris Kilway, Wilma Salzgeber, Norma Roberts, Barbara Sheridan, and Susie Parks. He is survived by his loving wife of 71 years, Marilyn; two daughters Melody (Donald) Turner and Georgette Bradstreet; four grandchildren Nicole (Tim) Cerwinsky, Lance (Alexandria) Bradstreet, Jessica (Doug) Wagner, and Joe Nordheim; eight great-grandchildren; and four great-great-grandchildren. The family will receive friends 10 - 11 AM Saturday, September 18, immediately followed by Mass of Christian Burial at 11 AM, all at St. Mary of the Assumption Catholic Parish in Springboro. Father Jim Manning will be celebrating George’s life. Stubbs-Conner Funeral Home in Waynesville is serving the family. Burial will be in Evergreen Cemetery, West Carrollton. If desired, contributions may be made to the Alzheimer’s Association. Condolences at www.stubbsconner.com.

BOWDEN, George J., age 90, of Miamisburg and formerly of West Carrollton and Waynesville, passed away Friday, September 10, 2021. George retired as a plant manager from DP&L in 1996 after 30 years of service to the company. He was a member... View Obituary & Service Information

The family of George J. Bowden created this Life Tributes page to make it easy to share your memories.

BOWDEN, George J., age 90, of Miamisburg and formerly of West...

Send flowers to the Bowden family.