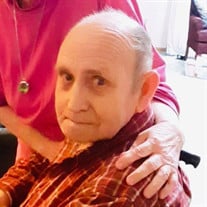 COFFMAN JR., George Henry, age 74, of Waynesville, passed away Thursday, February 18, 2021 at St. Leonard Retirement Community in Centerville. George graduated from Waynesville High School, class of 1968. He attended a Secondary School of Industry in Louisville, Kentucky following high school. From a young age, he was raised as a Pentecostal believer and kept his Christian faith his whole life. He retired after 35 years of work from General Motors - Frigidaire. He loved being around water, whether it was water skiing, boating, or fishing. His favorite places to travel were Rocky Fork Lake, Lake Erie, and the family property in Sevierville, Tennessee. He also greatly enjoyed golfing and bowling. He especially loved funnel cakes, so much that he had a funnel cake trailer that he would take to different festivals and events. He had a special place in his heart for all animals, especially his dogs. In his spare time, he enjoyed volunteering at a variety of different events including the spring clean-up at Miami Cemetery in Corwin. Woodworking was also one of his hobbies, which he used to help his wife make decorative wreaths. He was an assistant in many local Girl Scout Camps, including Camp Stonybrook in Waynesville, Camp Whip Poor Will in Morrow, and Camp Butterworth in Maineville. He continued as an assistant even after being stricken with Parkinson’s disease. He is preceded in death by his parents George and Zelma Coffman. He is survived by his wife of 49 years, Cherle, one daughter Karen Coffman, and one granddaughter Katelyn Abney. There was always a special place in his heart for his daughter and granddaughter. The family will receive friends 10:00 - 11:00 AM Thursday, February 25 at Stubbs-Conner Funeral Home in Waynesville. Burial will be at Miami Cemetery in Corwin. A funeral service will be held 11:00 AM Thursday at the funeral home. If desired, contributions may be made to The Michael J. Fox Foundation for Parkinson’s Research at michaeljfox.org. During this difficult time, if you are feeling ill or unhealthy in any way, you are encouraged to pay your respects in alternative methods, such as sending a sympathy card or sharing a memory though our online tribute wall. In addition, the services will be streamed live via the internet. If you wish to view the services on the Webstream, please click the link accessible from tribute wall tab of George's page on www.stubbsconner.com. Be sure to bring your mask to wear while you are inside the funeral home. Condolences at www.stubbsconner.com.

The family of George Henry Coffman Jr. created this Life Tributes page to make it easy to share your memories.

Send flowers to the Coffman family.