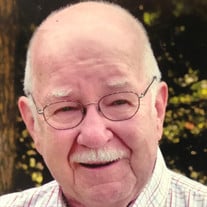 WILSON, George Edwin “Ed”, age 93, of Kettering and formerly of Miamisburg, passed away Tuesday, May 12, 2020 at Oak Creek Terrace Nursing & Rehab Center in Kettering. George graduated from Wilbur Wright High School. He served in the Army Air Corps during World War II. He worked for DESC and Wright Patt Air Force Base as a computer programmer before retiring. After he retired, he owned and operated Frames by George in Miamisburg. In addition, he was the founder of the Miamisburg Starving Artist Show. Among many things, he will be remembered for being an incredible artist who had created numerous art pieces from jewelry, paintings (oil and watercolor), pen and ink, and a variety of carvings- especially of ducks and birds. Easy to talk to, George never knew a stranger and was friends with everyone he met. Many would recall him as being the “nicest man they ever met,” who was multitalented, and always had a good story to share. As a lover of nature, he greatly enjoyed the great outdoors. He was an avid fisherman his whole life, even making his own tackle. Cowan Lake and Caesar’s Creek Lake were two places you would be able to catch him fishing. You could always find him hiking, camping, and teaching others about nature. He was a huge supporter of the Boy Scouts and was a leader for many years. He was preceded in death by his parents Robert and Leona Wilson. He is survived by his wife of 70 years, Rean Joan “Jo” Wilson; one son Steve Wilson; one daughter Deborah (Mike) Pitrone; two grandchildren Steuart (Julie) Wilson and Chelsea Wilson (fiancée Sam Lindamood); two great grandchildren Reese and Liam Wilson; three brothers Robert (Wanda) Wilson, Kenneth (Wanda) Wilson, Wayne (Linda) Wilson; one sister Ada Jent and their families; many cousins and their families; and numerous dear friends. Services will be scheduled at a later date. Stubbs-Conner Funeral Home in Waynesville is serving the family. If desired, contributions may be made to Ohio Hospice of Dayton and Caesar’s Creek Nature Center. Condolences at www.stubbsconner.com.

The family of George Edwin Wilson created this Life Tributes page to make it easy to share your memories.