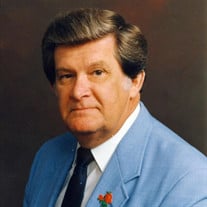 Grover Wells Brunton, age 85, of Waynesville, OH, passed away Wednesday, December 9, 2020. Grover, who was born on July 31, 1935 in New Boston, OH to Robert and Hazel (Ramey) Brunton, was known for his faith, service, and love for his family, congregation, friends, and neighbors. After graduating from Stockdale High School in 1953, Grover began his career at the Ohio Bell Telephone Company, where he would work as an Engineer and Manager, until his retirement more than 37 years later. On June 2, 1956, Grover married Bettie Jean Croley. The two shared a happy, loving life together while raising their three daughters in Waynesville, OH. They loved to travel and realized their dream of exploring Europe together in 1997. Their devotion to one another cannot be understated and will forever stand as a true example of love. Grover was a scholar who genuinely enjoyed learning and achieving academically. He earned his Associate Degree in English Bible from the Cincinnati Bible College (1978), Bachelor’s Degree in Human Development from Antioch University in Yellow Springs (1989), and Master of Ministries Degree from Kentucky Christian College (1994). His faith in God was evident. Ordained a Deacon in 1970, an Elder in 1976, and as a Minister in September 1978, he served many congregations on a part-time basis while continuing to work at Ohio Bell. Grover also worked as a missionary during that time, traveling to Barbados and Africa in support of the people and Ministers there, through partnerships with our local churches. Following retirement, he was always willing to answer the call and had the privilege to serve as Sr. Minister of the Bellbrook Church of Christ (1980-1983), Lebanon Church of Christ (1987-1991), and Medway Christian Church (1993-1999). He was blessed once again when asked to minister to the congregation of Laredo Church from 2018 until the time of his passing. Their fellowship made his final years that much more fulfilling and he was grateful to have such a loving and faithful congregation with whom he could worship. Grover also felt a call to teach. For several years, he was Chairman of the Charitable Giving Committee in the Valley of Dayton, with special emphasis on the Learning Center for dyslexic children. He joined the Board of Directors for the Learning Center, but later resigned that position as he decided that he would rather become a teacher in the center, and then as an occasional substitute teacher for the elementary and high schools in Waynesville, Little Miami, and Morrow. He eventually became a frequent substitute for many years at the Dayton and Xenia Christian Schools. Grover was also a 55-year Mason and member of the Ancient Accepted Scottish Rite, Valley of Dayton. He held many distinguished positions, including Worshipful Master (1968, 1979, 1980, 1983) and Most Wise Master of the Dayton Chapter of Rose Croix (1988-1990). He was coronated as an Honorary Member of the Supreme Council of the Ancient Accepted Scottish Rite for the North Jurisdiction on Sept 25, 1990 in Milwaukee, WI. He had numerous parts in various degrees of the Scottish Rite and for several years was the Director of the Chapter of Sorrows, an Easter drama presented by members, one of the very few performances that is open to the public. Grover also often played the role or the Wayfarer in the production, and was honored in a special tribute for his final performance on March 27, 2018. Grover was preceded in death by his parents and his sister Donna (Brunton) Jones. He is survived by his wife of over 64 years, Bettie (Croley) Brunton, daughters Kim (Brunton) Spratt, Karyn Brunton, and Kristi (Brunton) MacLaren, his son-in-law Randy Spratt, grandson Daniel Spratt, granddaughter Caitlin Spratt, and many he counted as extended family and friends. A funeral service for close friends and family will be held 1 PM Monday, December 14 at Stubbs-Conner Funeral Home in Waynesville. The burial will be in Miami Cemetery, Corwin. If desired, contributions may be made to Dayton Christian Schools and/or the charity of your choice in Grover’s memory. During this difficult time, if you are feeling ill or unhealthy in any way, you are encouraged to pay your respects in alternative methods, such as sending a sympathy card or sharing a memory though our online tribute wall. In addition, the services will be streamed live via the internet. If you wish to view the services on the live stream, please reach out to the funeral home at [email protected] to be added to the list. Be sure to bring your mask to wear while you are inside the funeral home. Condolences to the family may be made at www.stubbsconner.com.

Grover Wells Brunton, age 85, of Waynesville, OH, passed away Wednesday, December 9, 2020. Grover, who was born on July 31, 1935 in New Boston, OH to Robert and Hazel (Ramey) Brunton, was known for his faith, service, and love for his family,... View Obituary & Service Information

The family of Grover W. Brunton created this Life Tributes page to make it easy to share your memories.

Send flowers to the Brunton family.