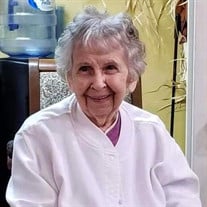 MILLER, Gwendolyn T., age 90, of Waynesville, passed away Wednesday, March 18, 2020 at Elmcroft Assisted Living in Xenia. Gwendolyn graduated from Wheelersburg High School in the class of ’47. After graduation, she served for several years as a candy striper in a local hospital. She married Paul Miller in ’49, and devoted herself to being a wife, mother and then grandmother. In the ‘80’s, Gwen and Paul moved to Georgia where Gwen volunteered at Augusta Humana Hospital where her faith in God and her love of people made her very helpful to those in crisis. In the ’90’s, Paul and Gwen moved back to Ohio, living in Waynesville until Paul’s passing in 2009. Paul and Gwen were members of Crossview Christian Church (formerly Ferry Church of Christ) in Waynesville. Gwen taught Sunday School, was in charge of the nursery, sang in the choir, hosted many youth group events, and was a great encourager to anyone in need. She lived her life for God, for family, and to care for others. She loved reading Scripture and desired to see her children and grandchildren following in her footsteps. Circled in her Bible was Psalm 71:18, “Even when I am old and gray, do not abandon me, O God. Let me live to tell the people of this age what your strength has accomplished, to tell about your power to all who will come.” Gwen was preceded in death by Paul in 2009, grandson Brian Atkins, great grandson Caden Paul Welch, her parents Henry and Mabel Hansgen, and her brother Henry Hansgen Jr. She is survived by her sister Dorothy Tuller; by three daughters, Sue (Tony) Jones, Judy Stevens, Patti (Chuck) Faber; by five grandchildren, Michelle (John) Trame, Tanya (Brandon) Welch, Terry (Ashley) Stevens, Melissa (Matt) Sleasman, and Ryan (Alison) Faber; and by eight great grandchildren, Tristen, Myah, Asher, Zane, Kayla, Brayden, Anna, and Colton. Private family graveside services, Chuck Faber officiating. Burial will be in Miami Cemetery, Corwin. Stubbs-Conner Funeral Home in Waynesville is serving the family. In lieu of flowers, contributions may be made to Hospice of the Miami Valley. Condolences at www.stubbsconner.com.

MILLER, Gwendolyn T., age 90, of Waynesville, passed away Wednesday, March 18, 2020 at Elmcroft Assisted Living in Xenia. Gwendolyn graduated from Wheelersburg High School in the class of &#8217;47. After graduation, she served for several... View Obituary & Service Information

The family of Gwendolyn T. Miller created this Life Tributes page to make it easy to share your memories.