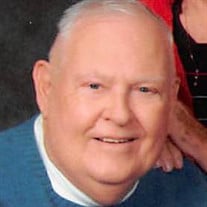 PLYMIRE, Harley E. age 79, of Wilmington, passed away Tues. Dec. 5, 2017 at his residence. A lifelong farmer in Warren and Clinton County, Harley also worked 31 years for Eastern Airlines and 15 years for Collett Propane. He was very active in the men’s group and many other activities at the Olive Branch United Methodist Church. He was also a 50 year member of the Harveysburg/Waynesville Masonic Lodge. Harley was an outgoing yet quietly generous man. He was very family oriented, always up for an adventure, and loved to tell stories. With the benefit of working for a major airline, he was able to take his family to most of the 50 states, Europe, all over the Caribbean, and many others exciting destinations. He loved sports, especially the Buckeyes, Reds, Browns, and Clinton-Massie Falcons. He was recently inducted into the Clinton-Massie Athletic Hall of Fame for his athleticism in basketball and baseball during his school days. Over the years, he spent countless days either coaching one sport or hauling a group of kids to another. His love of sports and travel have been passed down to his family as a result of so many fond memories he created over the years. His favorite time of the years was in the springtime, when it was time for planting, raising calves, and Spring Training for the Reds. He was preceded in death by his parents Francis and Lucille Plymire and his brother Charles Plymire. He is survived by his wife of 58 years, Shirley; three daughters Kimberlee Duffy, Kristina Plymire, and Lori (Steve) Laird; two grandchildren Tessa and Eric Duffy; and his sister Shirley Ames. The family will receive friends 5-8 PM Thurs. Dec. 7 at Stubbs-Conner Funeral Home in Waynesville. Burial will be in Miami Cemetery, Corwin. If desired, contributions may be made to the Chester Township Fire and Rescue. Condolences at www.stubbsconner.com.

The family of Harley E. Plymire created this Life Tributes page to make it easy to share your memories.

Send flowers to the Plymire family.