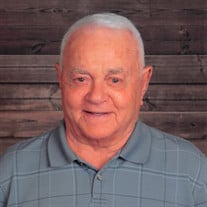 WHALEY, Henry E., age 88, of Spring Valley and formerly of Miamisburg and Georgia, passed away Sunday, August 8, 2021, at Ohio’s Hospice of Dayton. Henry spent time in Korea while serving in the United States Air Force, with 10 years of honorable service to our country. He retired from the Fishel Company in Dayton after 15 years of service to the company. For most of his work life, however, he performed upholstery work as a self-employed contractor, completing a vast array of projects from building and repairing furniture to automobile work. He was also a faithful member of the West Carrollton Church of the Nazarene. In addition to getting out and visiting with church members, the time he spent volunteering to bus ministry and children’s activities gave him great joy in his dedication to God at church. Roller skating, fishing, reading, and westerns were his favorite hobbies and pastimes. From the time he was a little boy, the excitement of roller skating became something he both perfected and enjoyed. The old rink in Germantown became his go-to place, which ultimately became a family affair with the introduction of skating to his kids, grandchildren and great-grandchildren. In addition to Sundays and Tuesdays with the kids and grandchildren over the years, many birthday parties and events were held at the rink to his delight. He roller-skated until he was nearly 75 years old. Fishing adventures to Paradise pay-lake in Gratis and to Top Sail Beach in North Carolina were also highlights nearly every summer while the kids were growing up. Of course, Top Sail Beach became a family tradition, which involved all of the beach-related activities. His favorite reading material included the Bible, western literature, and commentary articles. He enjoyed watching western movies on TV as well. The regular trips with his immediate family back home to Kentucky to visit his family and those of his wife gave him some of his fondest memories over the years. Among many things, he will also be remembered for how much he enjoyed hosting Easter at his home, complete with a grand Easter egg hunt each year. The tradition of watching the Dukes of Hazard with orange slices and popcorn will also be remembered fondly by the oldest grandchild. He was preceded in death by a grandson Nicholas Whaley; his parents Claude and Mae Whaley; and two brothers Wilburn and Jay Whaley. He is survived by his wife of 68 years, Barbara; four children Debbie (Bob) Johnson, Gary (Linda) Whaley, Angie (Bill) Griffin, and Timmy Whaley (fianceé Teri); 11 grandchildren Chasity (Brandon) Larson, Michael (Jamie) Whaley, Misty Bell, Carrie Bell, Andrea (Jeremy) Payton, Emily (Steven) Stanfield, Denelle (Jr.) Hernandez, Kenny Whaley (Ali), Kaylee Daum, Michael (Kat) Johnson, and Tanner Johnson; 19 great-grandchildren; and one brother Dee Whaley. Funeral services will be held at 1 PM Friday, August 13 at the West Carrollton Church of the Nazarene, 550 S. Elm St., Dayton, Ohio 45449. Bryan Heil will be officiating. Burial will be in Evergreen Cemetery in West Carrollton. The family will receive friends 11 AM - 1 PM Friday at the church. If desired, contributions may be made to the West Carrollton Church of the Nazarene and/or The Bridge Community Hub, Waynesville, 7766 Carter Dr., Waynesville, Ohio 45068. Stubbs-Conner Funeral Home in Waynesville is serving the family. Condolences at www.stubbsconner.com.

The family of Henry E. Whaley created this Life Tributes page to make it easy to share your memories.

Send flowers to the Whaley family.