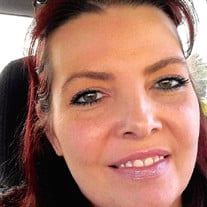 REYNA, Holly Anne, age 42, of Middletown passed away Sat. Jan. 12, 2019 at Atrium Medical Center. Holly grew up as a military brat as a result of her father’s 20 year service. Her passion for helping veterans and military groups stemmed from her dad’s service. She also had a lot of respect for America and its veterans. She graduated May 27, 2013 from Fortis College with a bachelor’s degree in criminal justice. Holly loved politics and was involved in many political groups. She was a member of the National Rifle Association and loved going to the firing range. Holly loved music! As a child she would sit for hours and listen to her father’s band play, she would even listen to them play live at concerts. Watching her dad play the guitar, caused an interest to spark in Holly. Not long after, her father began to teach her how to play. Even up to her last days, she loved playing her Fender guitar, which was passed down from her father. Not a day went by that Holly didn’t listen to music; either from the tv, her phone, or from the radio in the truck. Her music could always be found blasting away. She would walk around with her headphones on or even simply around her neck, where she was getting ready to put them on. When her husband, Rene, wanted to go a sports bar, for any event, his sport buddy (Holly) never had a problem going with him. Holly was there at any given time Rene asked. Almost every team they watched, they liked; especially the S.A. Spurs, Texas Rangers, Dallas Stars, and Texas Longhorns. Holly was a Denver Broncos fan (and a darn good one at that, she knew her stuff), while Rene and their daughter, Malina, were Dallas Cowboy fans. When it came time to see a great MMA or boxing match, Holly was there! She loved it and it showed. Rene put it best by saying, “She was the perfect woman for almost any man, but she definitely was the perfect one for our family and for me.” As an outgoing and energetic individual, she tried to always put other individual’s needs before her own and would even go out of her way to help someone. She was actively involved in her daughter’s classroom, helping with the read-along program. Her husband’s love of pit bulls carried over to her and she became an active member in the Pit Bull Rescue group. In her spare time, you could find her camping and hiking trails. Holly treasured spending time with her family more than anything else. She was preceded in death by her father, Charles “Tom” Rains, in 2018. She is survived by her husband of 10 years, Rene; one son Josiah Reyna; one daughter Malina Reyna; her mother Glenda Rains; and three brothers Christopher (Nancy) Rains, Thomas Rains, and Jeremy Rains. A memorial service will be held 2:00 PM Mon. Feb. 4, 2019 at Towne Church in Middletown. Stubbs-Conner Funeral Home in Waynesville is serving the family. If desired, contributions may be made to the Pit Bull Rescue Group. Condolences at www.stubbsconner.com.

REYNA, Holly Anne, age 42, of Middletown passed away Sat. Jan. 12, 2019 at Atrium Medical Center. Holly grew up as a military brat as a result of her father&#8217;s 20 year service. Her passion for helping veterans and military groups stemmed... View Obituary & Service Information

The family of Holly Anne Reyna created this Life Tributes page to make it easy to share your memories.

Send flowers to the Reyna family.