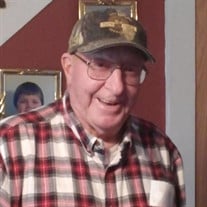 MILLER, Homer “Red”, age 79, of Corwin, passed away Wednesday, August 18, 2021, at Ohio’s Hospice of Dayton. Homer was known as being a tradesman, doing anything and everything. For numerous years, he welded for different manufacturing companies. He also helped run the Purkey Hardware Store for nearly 13 years. He was most well-known for his work with firewood, which he serviced and delivered for over 20 years. During the ‘70’s and ‘80’s, he greatly enjoyed being part of the boosters for the Sauerkraut Festival in Waynesville. In addition, he is a Past President of the Corwin Town Counsel. He was old school, yet a comedian who was quick to tell a tale. His house is filled with pictures of the days-gone-by and he could easily tell you each story behind the picture. He loved sports and would memorize names and scores of baseball players. For 28 years, he played softball as the starting pitcher. He appreciated the time he got to spend working in the family rose garden with his wife, Jacqulin. If you knew one thing about Homer, you knew he was punctual, whereby never late to anything, and many times so excited about the event that he would arrive at least an hour early. Being the handyman that he was, he loved being able to tackle remodeling projects with his sons. Among many things, he will be remembered for his big smile and the love he showed his family. He was preceded in death by his wife, Jacqulin, in 2014; two sons Carl and John Miller; parents Frank and Ethel Miller; and three brothers Billy Miller, Harold Dean Miller, and Frank Jr. Miller. He is survived by his two sons Greg (Christy) and Jeff (Lois) Miller; three grandchildren Megan Miller, LeAnna Mann, and Daniel Miller; three great grandchildren Alanna Houston, Elizabeth Jacqulin Mann, and Issac Mann; one brother Donald Miller; and five sisters Shirley Rains, Ann Daws, Joan (Edmond) Henry, Geneva Miller, and Ruth Mann. A combined funeral service for Homer and his son, John, will be held 11 AM Monday, August 23 at Stubbs-Conner Funeral Home in Waynesville. Tom Chattin will be officiating the service. Burial will be in Miami Cemetery, Corwin. The family will receive friends 5 – 8 PM Sunday, August 22 at the funeral home. For those unable to attend the services in person, you may watch the live stream of the service by clicking on the following link: https://view.oneroomstreaming.com/authorise.php?k=1629374601671605. Condolences at www.stubbsconner.com.

The family of Homer "Red" Miller created this Life Tributes page to make it easy to share your memories.