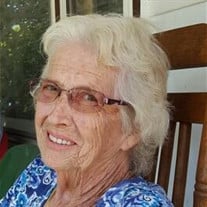 ADKINS, Ina Marie, age 84, of Lebanon, passed away Sun. July 22, 2018 at her residence. Originally from the mountains of West Virginia, Ina was born March 25, 1934 to Humprey and Ethel Christian in Guyan, West Virginia. Ina was very humble, sweet, and gentle. Family oriented, she greatly enjoyed being a homemaker and being there for her family. Ina was always welcoming of people in her home, and she loved sitting on her front porch in her rocking chair and visiting with family and friends. She especially enjoyed spending time with her grandchildren and bluegrass music. Over the years, she and her husband attended many bluegrass music festivals and met dozens of friends along the way. In addition, she enjoyed word search puzzles, a good cup of coffee, and attending church with her daughters at the Countryside Community Church in Lebanon and Baptist Tabernacle in Carlisle. She was preceded in death by her husband Donald in 2015; two grandchildren Jacob Wesley Adkins and Elizabeth Marie Morhous; her parents; three brothers Junior, Waitman, and Arthur Christian; and two sisters Sadie Hatfield and Zola Carter-Duncan. She is survived by two daughters Sue (Kenny) Wysong and Donna (Jeff) Morhous; two sons Donald Roger (Cathy) Adkins and Alvin Adkins; four grandchildren Vicky (Keith) Yocum, Jeffery Robert Morhous, Jeremy Wysong, and Matthew (Mackenzie) Wysong; five great grandchildren Tiffany (Travis) Gibson, Hunter Adkins, Michael Dorgan, Samuel Yocum, and Grace Yocum; one great great grandson on the way; and one sister Wanda Angle. Funeral services will be held 10 AM Sat. July 28 at Stubbs-Conner Funeral Home in Waynesville. Burial will be in Miami Valley Memory Gardens. Pastor Mike Gray will be officiating the service. The family will receive friends 5-8 PM Fri. at the funeral home. If desired, contributions may be made to Hospice of Dayton. Condolences at www.stubbsconner.com.

The family of Ina Marie Adkins created this Life Tributes page to make it easy to share your memories.

Send flowers to the Adkins family.