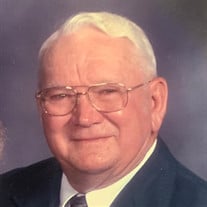 BURNETT, James “Jim” M., age 87, of Springboro, went home to be with the Lord on Sun. Jan. 6, 2019 at his residence. Jim graduated from Springboro High School, class of ’49. A Korean Conflict Army veteran, he proudly served our country in the 75th Field Artillery Battalion as a master sergeant, shooting a Howitzer. He attended New Freedom Church in Lebanon and was a past master of the Waynesville Masonic Lodge #163. He worked 24 years for NCR and 18 years at the Warren County Water Department, officially retiring in 1992. Family oriented, easy going, somewhat quiet, strong, and hard working, Jim was a gentle man with high character traits. He never worried or got upset and loved to tell a good story from time to time. For several years during the 70’s and 80’s, he and his wife operated a pick-your-own strawberry farm in Ridgeville. He also enjoyed antique tractors, playing euchre, trap shooting, golf, fishing, and his numerous pickup trucks and German Shepherd dogs over the years. Starting in 1979, and every October since, Jim and some of his high school classmates started traveling to Michigan for the purpose of snagging salmon. After salmon snagging was outlawed, their annual trip changed to playing cards, golf, and just enjoying each other’s company. Their annual trip grew to include the families of the classmates and became some of Jim’s favorite memories. In his later years, he also enjoyed sitting in his porch swing watching the cars travel up and down the road. He was preceded in death by his parents Russell and Zelma Burnett; great grandson Briggs Burnett; one brother Jack Burnett; and his sister Eileen Smith. He is survived by his wife of 65 years, Elizabeth Aileen; son Mike (Dawn) Burnett; daughter Sherry Holderbaum; five grandchildren Brent (Megan) Burnett, Drew (Samantha) Burnett, Leah Holderbaum, Kristen (Mason) Darby, and Brianna Holderbaum; three great grandchildren Kennedy, Evelyn, and Easton; and one brother Eugene Burnett. The family will receive friends 6-8 PM Thurs. Jan. 10 at Stubbs-Conner Funeral Home in Waynesville. Funeral services will be held 10:30 AM Fri. Jan. 11 with Pastor Joe Shutts officiating. Burial will be in Springboro Cemetery with full military honors. If desired, contributions may be made to Crossroads Hospice. The family would like to thank Crossroads Hospice for all of their care and compassion. With assurance that he is resting well in the arms of Jesus, he will be missed by all. Condolences at www.stubbsconner.com.

The family of James M. Burnett created this Life Tributes page to make it easy to share your memories.

Send flowers to the Burnett family.