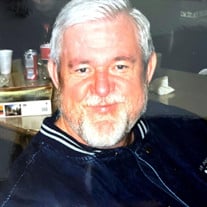 HUMES, James “Tom”, age 69, of Centerville, passed away Friday, June 11, 2021 at Southview Hospital. Tom was born September 10, 1951 to James and Elizabeth Humes in Richmond, Kentucky. He graduated from Waynesville High School, class of ’69, and served his country honorably in the National Guard. He retired in 2003 as Senior Supervisor from the Washington Township Road Department after nearly 30 years of work. Always funny with a great sense of humor, Tom was helpful, likable, made friends easily, treated his friends like family, and had a personality whereby he preferred to give versus receive. To his wife, he was loving and caring. During his younger days, he used to work in a bar in Lebanon where he would entertain the guests by acting as a DJ and singing along to the tunes. He even worked as a bouncer for a while, where he received the nickname “Big Tom.” His hobbies also included watching NASCAR, Packer and Steelers football, and Lakers basketball. His favorite pastime and passion however, was fishing. He would fish just about anywhere, but his freshwater favorites were little known OK Lake and Triangle Lake. For many years, he and his wife traveled to Melbourne and Sebastian in Florida to fish in the ocean. He mostly fished from the bank but he also charted a boat several times to go after the big fish. He made a habit of going out to the pier in Melbourne to fish, which resulted in lasting friendships with both local kids and older, well-established, citizens. Among many things, he will be remembered for how much he enjoyed the town of Melbourne, the fairs and activities in the area, the lasting friendships he made while visiting each year, and of course, the fish stories he earned. He is survived by his loving wife, Shirley, and several extended family members. While Tom and Shirley were married 44 years, they were high school sweethearts and have been together for 51 years. Funeral services will be held 1 PM Wednesday at Stubbs-Conner Funeral Home in Waynesville. Burial will be in Miami Valley Memory Gardens. Celebrant Katie Mackoway will be officiating the services. The family will receive friends one hour prior to the funeral Wednesday at the funeral home. If desired, contributions may be made to American Heart Association. Condolences at www.stubbsconner.com.

The family of James "Tom" Humes created this Life Tributes page to make it easy to share your memories.

Send flowers to the Humes family.