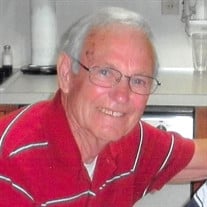 NIX, James E. age 80, of Waynesville passed away Sat. Sept. 26, 2015 at his residence. Jim retired from ABF Freight in Huber Heights in 1995 after 15 years of service. He attended the Waynesville First Baptist Church and was a member of the... View Obituary & Service Information

The family of James E. Nix created this Life Tributes page to make it easy to share your memories.

Send flowers to the Nix family.